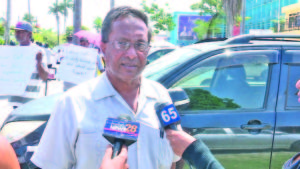 BY: SEEPAUL NARINE
The GAWU contemplated whether it should offer a response to Mr Earl John’s letter, titled “Unions must be required to be equal and productive partners if reconstruction of sugar industry is to be successful”, which appeared in the August 21 issue of the Stabroek News.

The usually eloquent Mr John waxed lyrical as he offered his perspectives to our Union’s response to Ms Akola Thompson’s column. In opening his batting, as it were, Mr John spoke about reduction in the number of estates between 1745 and 2010. The author pointed out the substantial decline in the number of plantations as he sought, in our view, to cleverly contend that the more recent closure of estates was a continuation of that evolution.

We hold the position that to level such contentions in abstraction tends to obscure the reality of the situation. The letter writer failed to acknowledge that advances in technology and productivity allowed the many smaller factories to be amalgamated into larger, more efficient units.

Our research informed us that, in 1885, sugar production in then British Guiana reached approximately 48,400 tonnes when 200-odd factories existed. This must be contrasted against what obtained in 1976, when sugar production climbed to some 330,000 tonnes with 11 factories in existence. In that period, the number of operating units declined by 95 per cent, but production went up by some 580 per cent.
Then there was a subtle justification for the employment of retirees in the factory department of the corporation. Mr John contended that this was necessary to replace lost skills, but our contention remains rooted in whether the recruitment of these persons really helped. The reality is that factory performance and efficiency worsened under their watch.

Now, we know the letter writer would want to argue that the newly rehired persons were “dealt a bad hand”, as they inherited faulty factories. However, we need to immediately dismiss that contention, as the factory sub-report of the costly Commission of Inquiry into the sugar industry, in regard to the now inoperable estates, did not express alarm about those factories. While a rosy picture was not necessarily painted, at no time was the view shared that the factories were in danger of collapse! Unfortunately, the same cannot be said of the current situation. So, it begs the relevant question: What value did these ‘valuable’ personnel bring to GuySuCo?

Mr John went on to speak about costs for certain services and benefits the industry offers, which he pointed out came from the generosity of the Management. In advancing his contention, we are told that the “…Venn Commission Report…stung conscience of the employers…”; but, again, the letter writer, in advancing his perspective, chose to ignore the reality that five (5) sugar workers were gunned down. He failed to acknowledge that sugar workers were on strike for nearly two (2) months after the planters had arbitrarily changed their conditions of work.

He mentioned the recommendations of the Venn Commission, but diverted from that Commission’s findings, which described the inhumane conditions workers and their families were made to endure, and the harsh economic burdens that were placed on their backs, which practically made them beholden to the plantocracy. So, it’s quite easy for one to blow one’s trumpet and talk about the seeming generosity of the planters, but yet turn a blind eye to impetus.

The letter writer next spoke about strikes, but let us remind Mr John that former Minister Keith Scott, during the 2018 Budget debate, took great pride in pointing out that strikes in the industry had fallen by nearly half at that time. Moreover, GuySuCo’s own data for the 2020 first crop indicated that strike days equated to 1.7 days per worker. This can hardly bring the harm Mr John exclaims about, but it goes to remind that no matter how much things change, the more they remain the same. As in the colonial period, and as in the more recent periods, workers are made out to be the chief scapegoats – blamed for all the maladies.

Logically, no worker wants to strike, he/she wants to work and earn; but, at the same time, he/she wants to be treated fairly and receive decent pay for a day’s work. The problem is that we have seen, over the last few years, a consistent effort to target the workers and just conditions. On this score, we saw Mr John touting the Annual Production Incentive (API), which incidentally was suspended during his most recent stint at the corporation.

Mr John concluded his missive by expressing the view that he didn’t completely agree with the way the estates were closed. This is an admission the learned gentleman had shared before, and has now reiterated. While these sentiments are recognised, we wonder where these expressions were when thousands of workers were pushed onto the breadline with hardly any clue about their future direction. It’s easy to reflect and express thoughts about what should and could have been, but to stay silent at the time when your voice could have probably made a difference, or at the very least sounded further concern, says a lot, in our view. So, while we welcome Mr John’s views, we consider them too little too late.

However, we must share Mr John’s view that the Unions must be treated as equal partners. Indeed, this must be a relevant feature to guide the rebuilding of the industry. We are hopeful that the proverbial walls GuySuCo had erected between itself and the workers and their representative unions, together with the hauteur it had demonstrated, would now be finally put in the past, where they belong, and all stakeholder parties – the workers, their organisations and the company – can now begin to collaborate in the interest of the industry, about which we all so deeply care.