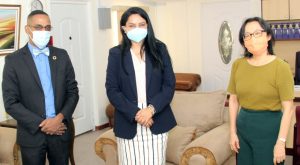 Curtailing teenage pregnancy, poverty reduction among vulnerable groups and creating initiatives to empower women were also among some of the other areas discussed at the meeting.
Tanaka informed the Minister that the United Nations is eager to launch and commence the implementation of the “Spotlight Initiative” – a European Union/United Nations global partnership to eliminate all forms of violence against women and girls.

Guyana, she said, has been selected as one of six Caribbean countries to benefit from this initiative
The Guyana Spotlight programme will provide a unique opportunity for the Human Services Ministry and its international partners to address family violence as a major public health and development issue with significant ramifications at the individual, community and national levels.