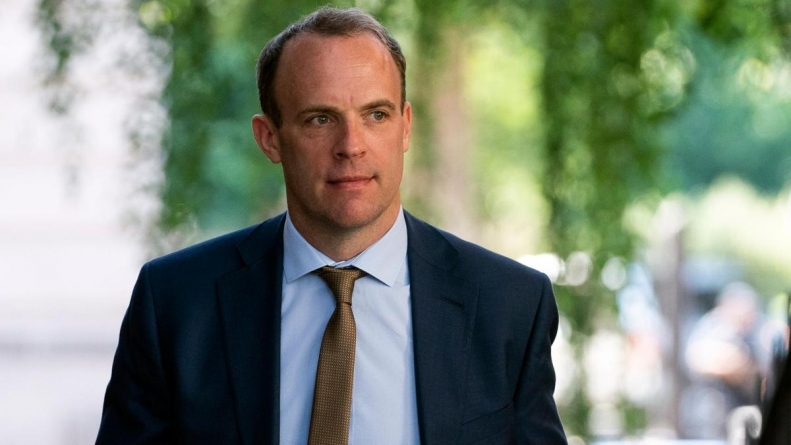 The United Kingdom is the latest foreign government to come out swinging at the A Partnership for National Unity/Alliance For Change (APNU/AFC) coalition in relation to the credibility of the March 2 General and Regional Elections.
UK Foreign Secretary Dominic Raab called on President David Granger to preserve the sanctity of democratic elections.

“We call upon the President to preserve the principle of free, fair and credible elections. Allegations of electoral fraud and premature declarations of victory prior to the completion of a credible process pose a grave threat to the democratic principles of Guyana. We call upon President Granger to ensure that proper procedures are followed before embarking upon a transition of government,” Raab said.
He added that the UK is deeply concerned about the events following the elections in Guyana and that his government stands ready to offer assistance to ensure a credible election result is produced.

UN expresses concern
Meanwhile, Stéphane Dujarric – Spokesperson for United Nations— and Secretary-General António Guterres said that they are following the issue in Guyana and called for calm and restraint when addressing issues arising from the process.
“Turning to Guyana, I can tell you we are following with concern the latest developments there, particularly the allegations that the tabulation of votes from one of the regions, namely Region 4, was not done according to proper legal procedures. We take note of the statements issued by international observers and ambassadors accredited in Georgetown also raising concerns over the situation. We call on all Guyanese to remain calm, exercise restraint and address any disputes arising from the process through legal channels,” Dujarric said.

Raab and the UN Secretary-General’s Office join a long line of foreign powers who have weighed in on the current electoral issues in Guyana.
On Monday, Secretary of State, Mike Pompeo announced that he discussed Guyana’s elections during a meeting with Canada’s Deputy Prime Minister, Chrystia Freeland.

In a tweet, Pompeo said he spoke about several issues including “support for democratic transition in Guyana”.
“Spoke today [Monday] with Canadian Deputy Prime Minister @CAFreeland [Chrystia Freeland] to discuss the crisis in #Venezuela, the COVID-19 outbreak, support for democratic transition in Guyana, and the importance of continued strong @OAS_Official leadership on democracy and human rights,” Pompeo said on his Twitter account.
Pompeo’s statements come on the heels of increased pressure from the international community to have the Guyana Elections Commission (GECOM) completely verify the Region Four (Demerara-Mahaica) results before any declaration is made.

Along with Pompeo, several other US officials have commented on the issue. Acting Assistant Secretary for the US Department of State’s Bureau of Western Hemisphere Affairs, Michael Kozak on Saturday last contended that Guyanese deserve a credible election.

Another US official, Tom Suozzi, who is a representative of New York’s 3rd Congressional District, which includes parts of Queens – where a large number of Guyanese are – also condemned the action by GECOM.
The ABCE diplomatic representatives of the international community have made it clear in a joint statement issued by British High Commissioner Gregory Quinn, United States Ambassador Sarah-Ann Lynch, Canadian High Commissioner Lilian Chatterjee and European Union Ambassador Fernando Ponz-Canto that GECOM must complete the process.

In their statement, the group noted that based on their observation of GECOM proceedings at the Region Four office and the fact that the full count was not completed, they questioned the credibility of the Region Four results.
Caricom, as well as individual regional leaders – including the Prime Minister of St Vincent and the Grenadines, Ralph Gonsalves and Prime Minister of Antigua, Gaston Browne— have weighed in on the situation, calling for the resumption of the verification process.

The western democracies’ sentiments were in sync with the local business community which insisted that the electoral process that undergirds democratic governance should not be subverted. Caricom, Organisation of American States, Commonwealth, France and Norway were among numerous groupings which called for the complete verification of the Region Four results.

The Private Sector Commission (PSC) also made it clear that they are appalled at GECOM’s attempts to trample on the statutory process. The Commission also noted that GECOM’s actions are occurring under the watch of the Chairperson, Retired Justice Claudette Singh.

On the evening of March 5, Chief Elections Officer Keith Lowenfield had committed to having the verification process run throughout the night until completion. However, this was never done, which was a clear violation of the law.
An injunction was sought and granted to former Attorney General Anil Nandlall after the Returning Officer for Region Four, Clairmont Mingo, attempted to declare unverified results for District Four from the General and Regional Elections.
Mingo, however, secretly declared the results – to the surprise of the main political Opposition, smaller political parties, elections observer missions, and the wider international community.

The matter is currently before the court with acting Chief Justice Roxane George slated to deliver her judgement at 14:00h today.