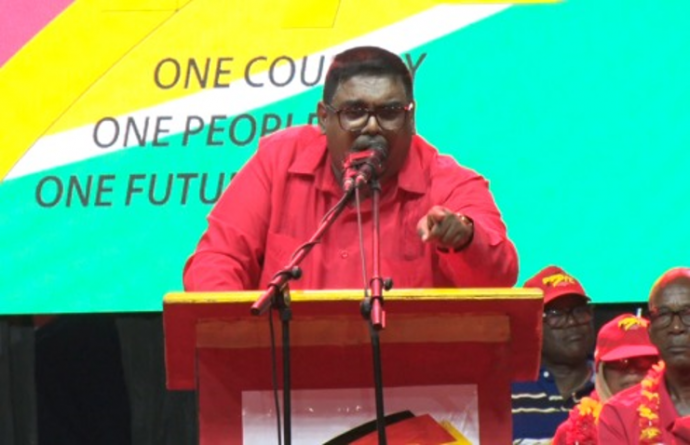 With the aim of creating more opportunities for Guyanese, the People’s Progressive Party/Civic is expanding its educational platform to include two new online campuses of the University of Guyana (UG) in Linden, Region 10 (Upper Demerara-Berbice) and Essequibo, Region Two (Pomeroon-Supenaam).

This was announced by the party’s Presidential Candidate, Dr Irfaan Ali, on Saturday during its massive final rally at Lusignan, East Coast Demerara. He noted that the party will ensure widespread benefits for all Guyanese in the various social sectors such as education.

“Every Guyanese can look forward, without hesitation, to a future in which their educational aspirations will be and must be realised because we are pursuing a programme that will deliver free university education to every Guyanese. And in delivering online education, we’ve committed to the establishment of online campuses, and two of those campuses will be in Linden, Region 10 and Essequibo, Region Two. Every Guyanese will be touched by the education programme of this party,” Ali posited.

This, he noted, is added to the party’s plans of providing 20,000 online scholarships. Further, the PPP/C will be investing in technical education programmes in order to build capacity among Guyanese so that more engineers and doctors are grown locally, Ali stated.

Additionally, the PPP/C Presidential Candidate said the party will also be working to place young people in enterprises and provide them with the tools and start-up capital they need.

These, according to Ali, are among the PPP/C’s host of measures to enhance the lives of all Guyanese.

“The journey has been long… you’ve weathered the storm and you’re now closer to shore… Relook at your conscience, make the right choice… We are moving forward on a platform of diversity, progress for prosperity, a commitment for dignity, opportunity for all, building a stronger Guyana together. Hope, inspiration, vision with clarity – we leave here with a commitment to working together for a better Guyana…” Ali stressed.

Furthermore, at the party’s final rally ahead of Monday’s polling day, the Presidential Candidate rallied Guyanese to be true to their conscience by voting for the party that will ensure a better future for everyone.

“This is not about race, not about ethnicity [but] this is about our future, this is about our country, this is about a better Guyana. And all of us must have a dream of leaving a better Guyana for our children and those who will come after us. This is an opportunity for us to leave that better Guyana; this is an opportunity for us to seal our part in removing dictatorship and returning democracy. Let us not fail our conscience, let us not fail our national duty. Let us turn out on March 2 and seal the deal by voting for the People’s Progressive Party,” he declared to loud cheers from the crowd.

According to Ali, these elections are too important for the party to take for granted after the assault that was meted out to the people of Guyana over the past five years.

To this end, he noted that the PPP/C has a plan to build a better Guyana for everyone and ask for support so that they can fix the country by returning jobs to the thousands who were placed on the breadline by the incumbent coalition and giving to those who were neglected, rebuilding trust and national unity, restoring constitutional rule and democracy, putting back money in the pockets of Guyanese that was taken out by the coalition through the hundreds of burdensome taxes, expanding infrastructure and transforming the economy as well as improving social services and welfare, among other things.

“We’ve seen many of our brothers and sisters sent to the breadline. More than 60 per cent of the dredges that were operating in 2015 are no longer operating today. In the forestry sector, more than 1200 persons have lost their jobs directly or indirectly. In the sugar sector, more than 10,000 have been affected and lost their jobs. The same can be said for rice and the Government’s response has been nothing. We are going to fix this on March 2 when you vote for the People’s Progressive Party/Civic. We have to make our productive sector work again by bringing back those jobs, by giving them incentives, by recapitalising them, by removing the burdensome taxes and help them to get back to work and back to production,” Ali contended.

He further pointed out that these plans will not only be for PPP/C supporters but for all Guyanese. According to Ali, everyone will benefit from the 50,000 jobs and house lots the party will be creating if it gets into office and even its social services benefits.

“After March 2, all Guyanese must be winners and will be winners… There will be no APNU/AFC line and PPP/C line… there will be one line – the Guyanese line…,” he asserted.