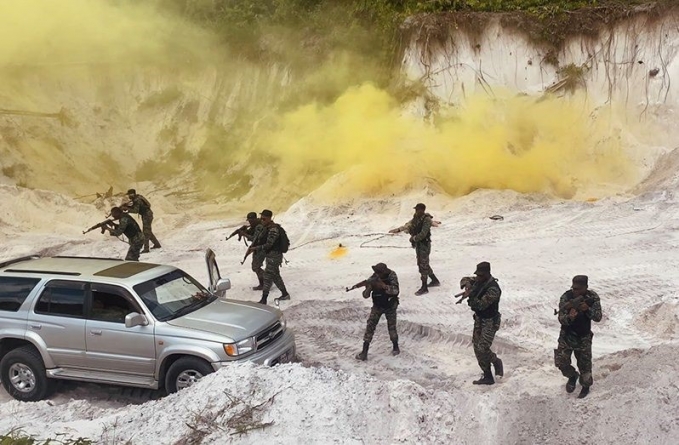 SEVENTEEN ranks of the Guyana Defence Force (GDF) 31 Special Forces Squadron have benefitted from a six- week stint of combined small unit tactics training, which was conducted by a nine-member team from the Seventh Battalion of the U.S. Army Special Forces.
The training aimed to provide the ranks with knowledge and practical skills to operate as a small operational team.

The six-week stint included one week of jungle training. The ranks engaged in a field exercise designed to have them demonstrate what they had learnt.
The instructors noted that the GDF troops were eager to learn and displayed a high degree of discipline, maturity and enthusiasm throughout the training. For their part, the GDF ranks indicated that the training was very informative with the practical exercises enhancing the learning process.

The graduates of the course who demonstrated high assimilation of what was taught, as well as showcased great leadership were identified as Second Lieutenant Shevin Sparman; Corporals Wayne Campbell and Orlando Norton; Lance Corporal Royden Hendricks and Private Mikhail Wills.
Private Wills, the youngest to receive such recognition, said he found the training refreshing and very beneficial.

“It has taught me a lot about the U.S. Special Forces and their small units tactics. This experience has certainly increased my experience in using different types of weapons and knowledge of ambush, raids and house-clearing drills. Now those of us who have received the training will go back and teach the other members of the squadron and certainly improve our operational methods,” he said.