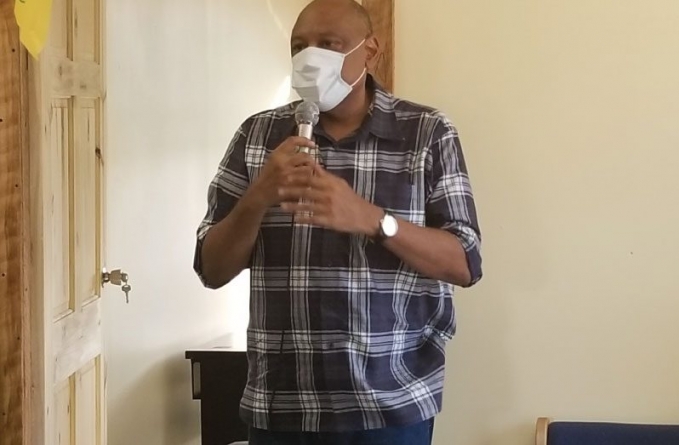 MINISTER of Natural Resources and Chairman of the Alliance For Change (AFC), Raphael Trotman, said that the Guyanese people should continue to be strong amidst the present political state in Guyana.

The Minister made the statement on Monday at a community meeting held at the Amelia’s Ward Community Centre in Linden, Region 10, where Regional Officials and supporters of the ‘A Partnership for National Unity and the Alliance For Change’ (APNU+AFC) coalition were present.
In his remarks, Trotman addressed rumours that have been circulating on social media and in society about President David Arthur Granger being uninvolved and “going quiet” amidst all the political havoc.

The Minister noted that President Granger is a man who is calm, responsible, and one who has to ensure that what he says is in equilibrium with the Law, the Constitution and all Guyanese.

“President Granger is a man of his own stance. He may not be loud and boisterous, insulting people on television everyday but that does not mean that he is not involved, so don’t be fooled by silence,” Minister Trotman went on to say.

Additionally, the Minister highlighted that unlike other countries experiencing political dispute, Guyana’s streets do not have “terror and confusion,” and as such, Guyanese should not allow outsiders to cause a ‘kerfuffle’ among the population, but Guyanese should “trust in what you believe in, despite of what you may hear and see.”
He pointed out the fraudulent votes that the National Recount would have revealed noting that only valid votes matter. Trotman said that whether the Court of Appeal rules in favour of the APNU+AFC or not, the coalition’s position remains firm and solid, on the basis that only valid votes matter.

The Appeal Court – comprising Justices of Appeal Dawn Gregory and Rishi Persaud, and High Court Judge, Priya Beharry – will hand down its decision on Thursday (July 30).

The ultimate intention of the appeal is to overturn Chief Justice (ag), Roxane George-Wiltshire’s decision that the elections results must be declared using data from the National Recount, which was executed in May-June under Order No. 60, the Recount Order.

The meeting also included a ‘question and answer’ segment which allowed persons to voice complaints and gain clarity on Guyana’s current political state.
Young supporter of the APNU+AFC coalition, Rennisa Webb stated the meeting was very informative and calming.

“Hearing from Minister Raphael Trotman clarified a lot and calmed my frustration because I am really tired of this hold up,” Webb said.
There were also meetings of this kind in Berbice, Essequibo, Bartica, and Georgetown, which took place under observation of the COVID-19 guidelines.