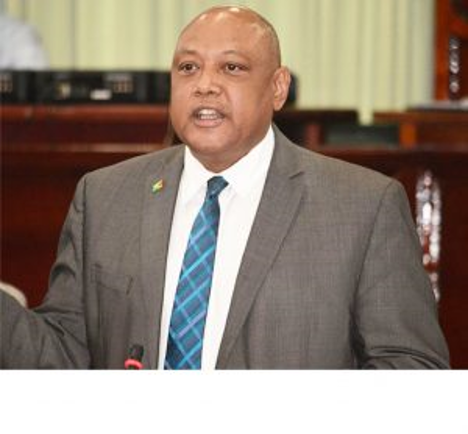 With his Government under intense regional and international pressure, Alliance For Change (AFC) Chairman Raphael Trotman is now under fire for recent comments he made in which he told Caribbean Community (Caricom) member states to “stay out” of Guyana’s business.

Trotman made these comments on Saturday, but they were quickly denounced by political commentator and Attorney-at-Law Christopher Ram. In a letter on Sunday, Ram reminded the de facto Natural Resources Minister of the importance of regional integration and moreover the important role these islands play in the region.

Ram also reminded Trotman that it was President David Granger himself who described Caricom as the most legitimate interlocutors in Guyana’s election controversy. Ram also pointed out that two of the three members of the Caricom recount observation team come from small islands

“Trotman must know that whether big or small, member states of Caricom all have equal standing and a single vote when it comes to voting. The same as with voting in the General Assembly of the United Nations. His statement is insulting not only to all members of Caricom but, at this particular moment, to St Vincent and the Grenadines which has just assumed the Chairmanship of Caricom.”
“Such undeveloped views of leading politicians of one country about other countries serve to undermine not only the cooperation and unity of our region but our own interest as well. Trotman ought to know that in seeking protection for our rice, sugar and other products under the Caribbean Single Market and Economy (CSME) it is those very countries whose support we will need,” Ram said.

In highlighting the significant strides made by these small islands, Ram drew reference to the formation of their own sub-regional Organisation of Eastern Caribbean States (OECS). He noted that these islands have their own stock exchange, Supreme Court and Central Bank and have overseen one of the most stable currency in the world over the past few decades.

Additionally, Ram noted that one of these small islands produced two of the three Nobel Laureates from the Caribbean, the other being Trinidad and Tobago. This is a reference to Dereck Walcott and Sir Arthur Lewis.
“He knows too that the President of the wider regional court is from a small island and that that court has continually saved Guyana from miscarriages of justice. In other words, Trotman should not be blind to the fact that there is much we can learn and benefit from those small islands,” the attorney at law said.

“At a personal level, Trotman should be the least of the Cabinet and the rigging cabal to disparage the small islands. His father Donald Trotman served in high office in two of those countries – St Vincent and Grenada – while his sister is currently part of the establishment in Grenada. And lest he forget, it is in one of those very small islands that he chose for his second marriage following his signing of the lopsided petroleum agreement with ExxonMobil.”

Ram also laid into Trotman’s defence of Chief Elections Officer (CEO) Keith Lowenfield’s fraudulent report, which he submitted to Guyana Elections Commission (GECOM) Chair, Retired Justice Claudette Singh, on Saturday. While Trotman believed that the Representation of the People Act would not allow Singh to overturn the report, Ram warned Trotman that laws must be read in their entirety and not in a vacuum. He also reminded Trotman that the so-called constitutional crisis Guyana is in is all A Partnership for National Unity/Alliance For Change’s doing.

“In any case, after the pain through which the APNU+AFC is putting Guyanese, the likelihood of the imposition of sanctions on Guyana, the potential for the embarrassment they are causing Caricom, and the setback for democracy for the wider community of nations, Granger, Harmon and Volda Lawrence, among others, are undeserving of trust by anyone or the engagement in any conversation. The “constitutional crisis” Trotman refers to has arisen from the unwillingness to play by the rules of democracy. It is that simple,” Ram said.

According to a report in sections of the media, Trotman on Saturday told Caribbean island nations to keep out of Guyana’s business and allow Guyanese to solve their own problems. According to Trotman, such islands would not be able to understand Guyana.

“I am all for Caricom, I am all for regionalism but no people with constituencies with four and three hundred people could understand… I hate to say it but some of the countries in the region just cannot, unfortunately, provide the kind guidance that we need at this point in time. We wish them well. I know some of them think that they are doing well but they are not helping their own causes and they are not helping certainly the Guyana cause by issuing instructions and pronouncements,” Trotman was quoted as saying in the report.

One of the foremost advocates for the declaration of the election results using the recount figures has been former Caricom Chairperson and Barbados Prime Minister Mia Mottley. Mottley, who had previously denounced the “dark forces” in Guyana who did not want the recount to proceed, was highly critical of a previous report from Lowenfield, which disenfranchised over 100,000 voters and was subsequently ruled as unlawful by the Caribbean Court of Justice.
New Caricom Chairman and Saint Vincent and the Grenadines Prime Minister Ralph Gonzales, has also supported his predecessor’s efforts in this regard. He had also leapt to Mottley’s defence after she endured vitriolic attacks from persons aligned to APNU/AFC for her position.