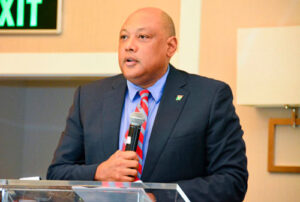 Former Minister of Natural Resources, Raphael Trotman yesterday said that the former David Granger government relied on the due diligence of Guyana’s development partner, the World Bank when it made three controversial hires of entities linked to ExxonMobil, to consult on oil & gas matters which concern the supermajor.
Kaieteur News has shown how several entities are linked to ExxonMobil, but were asked by the Coalition government to review or produce content to regulate the major’s work. Situations such as this tend to constitute a conflict of interest.

Trotman said that when he was Minister, he made attempts to engage law firms of the best quality, and that most of them responded that they weren’t able to advise because they were conflicted.
“That is to say that they had some arrangement with either Exxon or a subsidiary,” the former Minister said.
However, the hires in question occurred after the Trotman was stripped of the oil & gas portfolio.
Trotman said that Dr. Mark Bynoe, who was the Energy Director at the time these hires were made, would be the best person to answer.

However, based on his experience, he echoed thoughts shared by Dr. Bynoe when asked about one of the hires, that the Government would be hard pressed to find large, reputable firms not linked to any of the oil majors in some way.
“In this industry,” he said, “where there is a closed number, there are only about 5 companies in the world that have the deep offshore experience, ENI, CNOOC and I believe Exxon being one of them. So there’s a difficulty immediately in finding companies that are not in one way or the other, either presently or in the past associated… At the end of the day, it is almost impossible to find any of the big law firms and the big companies that do reviews and impact assessments etc., that have not at one time or the other worked for one of the five majors.

He does not believe that any of the matters could be adjudged conflicts of interest “on the face of it”, that there are degrees to any potential conflict, which would require further examination.
“So it’s difficult for us to say upfront that it was or was not.”
The Coalition Government had hired UK based consultant, Dr. Michael Warner to produce a local content policy for Guyana’s oil sector, which would regulate Exxon’s local content commitments. Dr. Warner is a former employee of DAI, the contractor engaged by ExxonMobil to manage the oil giant’s Centre for Local Business Development in Georgetown.

Thirdly, the Granger government had hired the law firm, Hunton Andrews Kurth LLP, according to former Energy Director Dr. Mark Bynoe in February, to review Guyana’s oil laws. One month later, one of the UK’s top publications, The Guardian, noted that the firm enjoys a 40-year-old relationship with ExxonMobil.
All three of the situations would raise red flags for any official conducting due diligence checks on prospective hires. All of the consultants, as Trotman said, received the blessing of the World Bank, as the aid to fund their work came from a World Bank loan.