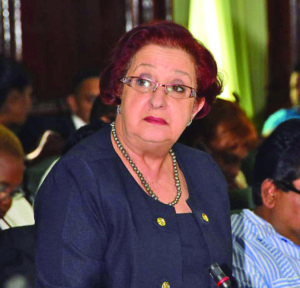 Executive Member of the People’s Progressive Party Civic (PPP/C) and former Chief Whip thereof, Gail Teixeira, on Wednesday said that before Guyana can move to discussion on a new governance model to reflect inclusivity, there first needs to be a transparent and democratic transition of Government.

Her statement comes as social commentators increase the narrative of inclusive governance in recent days, even as Guyana continues to be in gridlock regarding the results of the March 2 General and Regional Elections, where there have been “deliberate” efforts by the caretaker APNU/AFC Coalition to block a recount of the contentious Region Four (Demerara-Mahaica) votes after the tabulation process was marred with controversy and “credible evidence” of fraud at the hand of Returning Officer (RO) Clairmont Mingo.

According to Teixeira in a letter to the editor on Wednesday, “Guyana needs stakeholders in the electoral process, civil society representatives and ordinary Guyanese citizens, among others, to be a part of the process of addressing a new governance model for sustained progress and development of our country; not the divvying up of the spoils to a few who feel they have been born with some personal entitlement. But first we must ensure that there is a transparent and democratic transition of government.”

She noted that these continued commentaries over the past few weeks are coming from “self-styled defenders of good governance”, whom she believes have not only been vocal but “undeniably opportunistic” in their calls for executive power-sharing.

As an Executive Member of the People’s Progressive Party (PPP), Teixeira questioned whether these same persons would have been calling for executive power-sharing had the APNU/AFC Coalition won the recent elections, especially since they quite know what had happened when the Coalition took office in May 2015.

She pointed to 2011 when APNU and AFC, as combined opposition parties, held a one seat majority and controlled the Legislature. Teixeira, who was the Government Chief Whip in that Parliament, noted that Guyanese were witnesses to the APNU/AFC’s approach of ‘total control’ and the flexing of their proverbial muscles regardless of the consequences to the PPP/Civic’s national development agenda.

“Cuts of $90B to the national budgets in 2012, 2013 and 2014 slowed down the economy, scuttled transformational projects, and denied citizens of infrastructural development and necessary social programmes…In the post-2015 elections, with less votes together than in 2011, and a margin of less than 1%, the APNU+AFC Coalition took office. I do not recall persons clamouring then for executive power sharing and a national unity government. Instead the slogan was ‘a majority is a majority’ and ‘it is a-we time’,” she asserted.

On this note, the PPP Executive surmised that one objective to this increased narrative of power-sharing is to shift the focus from the critically important issue at hand – a transition of government that is based on free, fair, transparent and credible declaration of results from the elections held more than three weeks ago.

“As Guyanese, we cannot afford to shift our attention from this, the most critical issue at hand –the maintained focus on protecting and preserving our democracy. The alternative is an illegal, undemocratic government; facing international condemnation as a “pariah” state; and consequent sanctions,” she contended.

Moreover, Teixeira pointed out that another reason behind this heightened call for executive power-sharing seems to be premised on ethnic insecurity.
She noted that for the period 2012-2020, there have been “no interest, indication, action or policy that the Granger-led APNU/AFC has any interest in power-sharing. Rather, those vocal on the issue of executive power-sharing are essentially attempting to preserve their personal interests and power.”

To this end, the former Opposition Chief Whip outlined that the history of the PPP, both in and out of office, has been one that never closed the door to inclusive governance and constitutional reform.

In fact, she noted, the PPP has worked at the grassroots level to broaden its support base in an effort to ensure greater inclusivity.
“We are the only party that campaigned on a platform of national progress, with a multi-ethnic list of candidates of women, youth, religious, geographic and ethnic diversity,” she stated.

Teixeira further highlighted that even the party’s 2020-2025 manifesto clearly states that it is “aware that issues concerning constitutional reform, particularly in relation to a national, inclusive governance model” have been raised and discussed in the public domain; and therefore, it is “committed” to a national participatory process to addressing a new governance model.

“The PPP remains committed to this…[But] there can be no discussion of a new governance model and constitutional reform unless democracy is intact,” she posited.