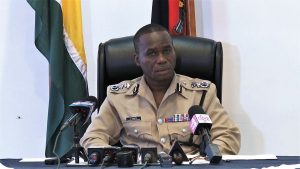 President David Granger yesterday said that Commissioner of Police Leslie James and Deputy Police Commissioner Maxine Graham have been asked to stay on the job to oversee “a special operation.”

That special operation is Guyana’s four month long electoral impasse.
Granger was responding to queries as to why the Top Cop and his Deputy were still holding public office when they should have been on accumulated leave,
“We are in a very abnormal period of Guyanese history, and the Commissioner of Police was required to supervise a special operation to ensure that there was no disturbance of the peace or disruptions during the elections,” Granger told the press.

He made reference to the February riots in Region Five where one man lost his life, while many others including law enforcement officers and children were injured.
President Granger said: “That is why he is still at this post. As you know, on Friday, 6th of March, there was violence in Region 5 and the police had to be deployed, so there was a specific operation which had been started to tackle this.”
According to the President, when the period is over, and the system returned to normalcy, the Commissioner and Deputy would proceed on leave.

The issue came to the fore, after it was revealed that the President had granted permission for Chief Of Staff Brigadier Patrick West to proceed on accumulated pre-retirement leave effective from yesterday. His leave is expected to end in March 2021 at which time his retirement will commence.

Back in 2015, when the Coalition administration took office, all public servants were ordered to take their annual leave or forfeit same, since it was recognized that taking payment in lieu of leave was putting a financial strain on government’s coffers.
Then State Minister, Joseph Harmon, in a message to those holding public office had stated: “We are saying, as a general statement, as from 2015 going forward, that when you are entitled to your leave, you have to take it in the year. If you don’t use it, you are going to lose it.”

Questions were raised after it was revealed that James and Graham should have proceeded on accumulated leave since early June. Both, according to reports, have more than 16 months of accumulated leave.
This publication was also privy to copies of documents, confirming that both the Top Cop and his Deputy should have been sent on leave.

Responding to queries, Public Security Minister, Khemraj Ramjattan had told an online media outfit: “Look, I don’t know why they are still on the job, I will have to check that out to see what exactly is happening over there, I am not aware of that…I know nothing about that.”
However, Minister Ramjattan yesterday stated that both Commissioner James and Deputy Commissioner Graham are “validly there”.

Traditionally, any public servant who attains the age of 55 is required to retire from his or her post. The system, moreover, caters for public servants with accumulated leave to proceed on same into their retirement.