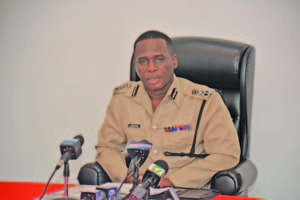 Caretaker President David Granger has defended a decision to have several members in the hierarchy of the Guyana Police Force remain on the job, despite their having significant amounts of accumulative leave which would lead them into retirement.

Meanwhile, Deputy Police Commissioner (Operations) Maxine Graham will turn 55 in November. She also has accumulated approximately 172 days’ leave and should have been sent on pre-retirement leave since June 11.
Questioned about the reason behind having the top-ranking Police officials still on the job, President Granger explained that it was an administrative decision.

While acknowledging that an instrument was passed stipulating that leave should not be accumulated and that officers within the Disciplined Services should enjoy their leave in the calendar year when it is due, the Head of State defended the move to keep on the Top Cop, saying it was because of the “special operation” that was launched for the March 2 elections, and it had to be extended because of the prolonged post-election period.

“We are in very abnormal period in Guyanese history, and the Commission of Police was required to supervise a special operation to ensure there was no disturbance of the peace, no disorder during the elections period, and that is the reason why he is still at his post…It is an administrative decision, not a decision about any other legal or operational [basis], to allow him to supervise the conduct of that operation,” he noted.
Nevertheless, the Caretaker President assured that these officials would enjoy their “entitlements” after this period is over.
On the other hand, the Commander in Chief pointed out that the processes to appoint a Chief of Staff of the GDF and a Commissioner of Police are completely different.
Whereas the appointment of the Chief of Staff is decided at the level of the Defence Board, the selection of a substantive Top Cop requires consultation with the Opposition Leader.
Likewise, with the appointments of Deputy Commissioners, the President would require the advice of the Police Service Commission, which he noted he has not gotten as yet.

James joined the Police Force in 1987, and was appointed Top Cop in May 2018 following the retirement of former Police Commissioner Seelall Persaud.
Also with 33 years of Service under her belt now, Graham was the lone female among four new Deputy Commissioners appointed by President Granger back in August 2018.