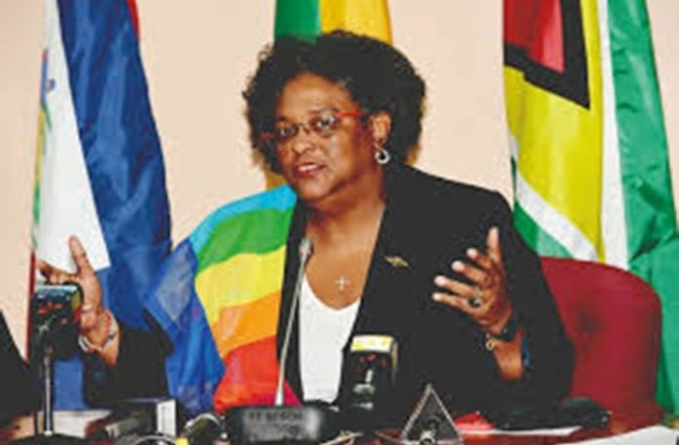 Chairman of CARICOM, Prime Minister of Barbados, Mia Mottley will be leading a delegation of regional leaders to Guyana, today, to discuss the current impasse following last week’s general and regional elections.

According to a report from Barbados’ Nation News, Mottley made the announcement during a national address from the Hilton Barbados where the Social Partnership met to discuss the 2019 Coronavirus (COVID-19).

Meanwhile, Prime Minister Dr Keith Mitchell says that he will also be part of the team of regional prime ministers who will be accompanying the chairman of the Caribbean Community (CARICOM) “I am one of those asked to lead a delegation of leaders to Guyana tomorrow (Wednesday) to attempt to bring some semblance of peace and order to Guyana at this particular time,” he said while reminding reporters in 1997 he was part of a similar undertaking while he was chairman of CARICOM.

‘We had a similar situation in Guyana where the result of the election was accepted by the opposition and there was upheaval in the country at the time and I had to go in there and try to bring peace and we were able to resolve the issue as CARICOM,” he recalled.
The other Prime Ministers are Ralph Gonsalves of St Vincent and the Grenadines and Roosevelt Skerrit of Dominica. “Three of us are considered three of the oldest serving leaders in the region, so we have been asked to join the Chairman of CARICOM on that mission to Guyana,” Mitchell said.

The electoral process is not yet completed because the matter is tied up in the High Court, after an injunction was filed by a supporter of the main opposition People’s Progressive Party/Civic (PPP/C) to block the Guyana Elections Commission (GECOM) from declaring results.

In a recent statement, Mottley had said CARICOM stands ready to facilitate dialogue between Guyana’s main political leaders and take other necessary actions to aid in the process. “I have spoken to both the President and the leader of the opposition and indicated that CARICOM stands ready to be able to be there to facilitate further dialogue and any actions that are necessary,” said Mottley in a press statement on Saturday.
According to Mottley, CARICOM has done this on many occasions in the past, including in Guyana, when elections have been highly contentious and when social order and the rule of law had been threatened across the Region.

Speaking more about CARICOM’s willingness, she said: “We are family and this is what happens when there are disputes in families. We will work together to create the space for dialogue and resolution once there is an acceptance on the part of all parties that there is a higher interest beyond simply the result in this election.”
Over 600,000 Guyanese were eligible to vote in the March 2, 2020 General and Regional

Elections and there were some 2,339 polling stations across the 10 administrative regions. Nine political parties contested the general elections and 11, the regional elections.
There has since been civil unrest and political tension following the declaration of results for Region Four (Demerara-Mahaica), by the region’s Returning Officer (RO), Clairmont Mingo.
According to those results, the incumbent A Partnership for National Unity and Alliance For Chance (APNU+AFC) Coalition received 136,458 votes and the PPP/C received 77,329 votes.

“The Caribbean Community calls on the electoral officials in Guyana and the representative political parties to work together to achieve a peaceful and lawful completion of the electoral process in Guyana by ensuring the tabulation of the results in all regions using the Statements of polls in a transparent manner in the presence of the representatives of the political parties and the electoral observers,” said Mottley, noting that every vote must be made to count; and transparently so. The CARICOM Chair has noted that all sides of the political divide have been making “serious allegations” against each other, but believes that it is critical that good sense prevails.

“The preservation of law and order is paramount and all parties must work hard to ensure that there is peace on the roads and in the communities across Guyana. There has already been one death reported overnight (Friday). That is one death too many,” Mottley asserted. In breaking her message down further, she said: “In simple language, we ask the parties to recognise that the primary consideration must not only be who will be President but, more so, who will be alive come next week or next month, for there cannot be tolerance for any further loss of life.”