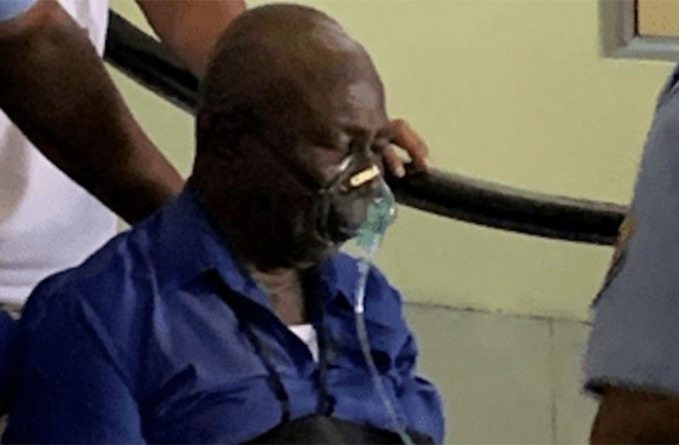 10.42 AM – Returning Officer (RO) Clairmont Mingo meets with party representatives and members of observer bodies.  Party representatives were told that they were not accredited by the Guyana Elections Commission, and in accordance with the Representation of the People Act, Section 86, as RO he could deem who was necessary to observe the process.

11.04 AM– The tabulation commences and the RO informs that he will be reading from a spreadsheet. This sparks a protest as persons question whether the process is in conformity with the ruling of the Chief Justice on March 11th.

11.37 AM– Mingo after seeking clarity said he will continue to read from the SoPs. Parties object again.

12.10 PM– Party representatives complain to Chairman of GECOM, Claudette Singh, who after listening to the complaints said she was promised the written judgment and would like to see and understand the judgment before making a decision.

12.17 PM– Verification process suspended by Singh until she receive the written judgment. Heads of the diplomatic missions from United States, Britain, Canada and the European Union and observer bodies begin to leave.

3.59 PM– Remaining stakeholders were informed by the RO that the Chair was still awaiting the written judgment and as such they would resume the tabulation exercise at a time to be fixed.

March 13, 2020
8.30-9.00 AM- Stakeholders begin arriving at the Ashmins building at High and Hadfield streets for the continuation of the tabulation and verification process.

9.10 AM– Returning Officer  Mingo informs stakeholders that he will only be allowing one representative for each party and one observer per observer mission. He also informed that no information from the tabulation centre must be released.

9.45 AM– Party representatives and observers are verbally abused by APNU+AFC representative Carol Smith Joseph following objections to inconsistencies with Statements of Poll.

10.10 AM– Heads of the Diplomatic Missions here from United States, Britain, Canada and the European Union walk out of the process as the inconsistencies continue.

10.19 AM– Mingo was summoned to the court of the Chief Justice.

10.23 AM– He hands over his duties to a clerk and leaves for the court hearing.

10.46 AM– Some party representatives walk out of the process citing irregularities. The process continued nevertheless.

12.45 PM – Party representatives returned to the tabulation centre for mediation on the way forward.

1.18 PM – The RO returns and suspends the process and informs those present that it will restart at 4:00 pm at GECOM’s secretariat in Kingston.

4.26 PM –Mingo arrives at the area identified for the projection of the SoPs and explains the process of tabulation.

4.35 PM– Questions and concerns are raised by stakeholders but no answer is provided by the RO. An observer tried to view the SoPs being scanned but was told to step away.

4.48 PM– The process starts but nothing is visible on the screen.

5.00 PM– Yearwood and Joseph in a physical confrontation. They were parted by police.

6.00 PM–Yearwood escorted to the Brickdam Police Station. Objections continue to be raised.

6.00 PM-8.30 PM – Representatives of the United Republican Party and Liberty and Justice Party leave the process.

11.00PM – Mingo makes the declaration and swiftly leaves the compound under police protection.