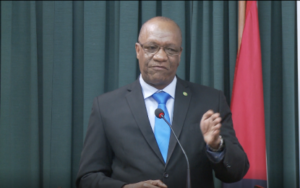 Three months after his initial commitment to do so, Opposition Leader Joseph Harmon has failed on hosting his party’s oil and gas press conference to deliver information on the awards of the Kaieteur and Canje Oil Blocks, among other pressing sector-related issues.
On October 2, after being pressed on oil and gas issues, Harmon gave his first promise to host a press conference specifically dedicated to answer questions related to the sector.
“We will have a specific press conference on oil and gas,” he had said, “and at that time, the question will be answered once it is posed.”

This was in the wake of Kaieteur News having, for weeks on end, produced articles on the shoddy awards of the two lucrative assets, the Kaieteur and Canje Oil Blocks that were signed away by the Donald Ramotar administration under questionable circumstances.
For the entirety of the coalition’s term in government, Harmon played a key figure at the helm of the Ministry of the Presidency (MotP). He was Minister of State, then Director-General and throughout that period, the Ministry of Natural Resources fell under the Presidency, giving him oversight over the sector.
Yet, later, on October 20, Harmon had told Kaieteur News that he was relying on this publication’s information to take action on the Kaieteur/ Canje Oil Blocks giveaway.

A month after that, on November 20, at another press conference, Kaieteur News had posed questions to Harmon about the award of the blocks. He had avoided giving a direct answer and indicated that information would be shared at the special press conference, which he had initially promised would take place.
In that press conference he has stated, “Let me say that I am not in a position this week to indicate to you. However, I did say in my previous press conference that we will have a special conference on the question of oil and gas. That has not happened as yet. I will inform you when that will take place, but it is something that the team is looking at carefully.”
Harmon has held no press conference since then.

Notably, when David Patterson, Opposition Shadow Minister for Oil and Gas, was asked on November 28 about Harmon’s press conference commitment and whether he was aware of the intended conference, and said only, “I have read about it but unfortunately, I have not engaged the Leader of the Opposition so obviously, I would not comment on that.”
Patterson then added, “But obviously, if the Leader of the Opposition…maybe will hold the press conference when it is convenient.”