Since ancient times, beer has been synonymous with tantalizing the senses and holding the power to irrigate the stress of a hard day from one’s soul. Scientifically, it is known to also be a “feel-good” drink which stimulates the reward centre of the brain leading to a release of dopamine–the hormones responsible for pleasure.But not all beers are able to live up to this expectation. In fact, many beers, particularly those which flow from mass production breweries, fail to deliver the crisp, flavourful taste that is expected since mass-produced beer does not use premium ingredients because cost-effectiveness and production on a massive scale is the priority.

While the local market is saturated with a number of beers that can easily fit this description, three pals, Pierre, Alan, and Stuart, are hoping to offer Guyanese a far more superior product that will truly change the industry for the better. 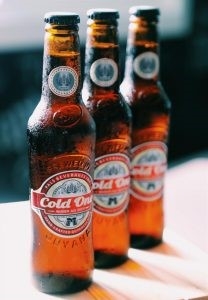 According to Pierre, the trio formed a company called Pals Beverage which draws on the acronym of their names and served as a catalyst for the creation of a new beer called, “A Cold One.” And it is actually the first of its kind on the market too. During an exclusive interview with Kaieteur News, Pierre noted that this is the nation’s first craft beer which is a combination of ale and beer. Even the blend is definitely new to the market.Pierre, a local businessman, explained that the new creation was primarily driven by the love for a refreshingly delicious, iced- cold beer, or as Guyanese would say, “a cold one” , hence the name.

The journey to “A Cold One” Pierre stated, was filled with trials and errors. The businessman said, “There were two periods of trials. Before we decided to go on a big scale, we did many trials of home brewing, which is basically following all the steps but in very small quantities, like four gallons or so. That was in 2016 and 2017. Honestly, we lost count of how many trials we did at home, somewhere around 30 or so. Then came the trials on a large scale. Once we had the equipment in place, that was sometime at the beginning of 2018.”

He added, “Brewing at home and at the factory are the same principle, but a very different exercise. We brewed throughout 2018 and 2019, some batches came out fine, but many times, we had to dump the entire brew due to mistakes. The brews that were good, we bottled them in some sample bottles that we had and gave them away.”

With respect to the final composition for A Cold One, Pierre said that he and his partners actually went out on a limb to make a different and better beer that the nation’s palate has never experienced before. “First thing was the choice of type of beer, we went for an Ale rather than the lagers used in mass production. Ales use a different yeast and they are much more difficult to process and preserve, but they are also tastier.”

Once they were settled on that aspect, he said it was decided that the brew is made from pure, raw grains rather than concentrate. He said that the extraction of the sugars from the grains is also very technical, but gives PALS the ability to make its own formula, which is not possible from concentrates.
“When creating our formula, we shared many, many samples around friends and we trimmed the formula to suit everybody. Once we were happy with the product, we focused on the packaging and spent countless nights (on this process too).”

Because it is a handcrafted beer, Pierre was keen to note that PALS Beverages only utilizes the highest quality grains to extract its sugars rather than from concentrates or rice. The businessman said that the PALS team would crush the grains themselves in order to get the freshest aromas possible. “In general, we follow the German “purity law” of beer making which basically says that beer should not contain other than malt and hops, otherwise it could not be called ‘beer.’ Of course since the law was conceived, science has shown that certain additives improve the character, hence it is not as strict anymore, but the purity concept remains and it reflects on the refreshing and agreeable effects of a natural versus over processed ones…,” the beer aficionado noted.

Though Pierre and his pals are hopeful of making it big in the local market, he was keen to note that PALS is after more than just material success. Pierre said that he and his partners want ‘A Cold One’ to be representative of binding friendships among Guyanese on any given occasion. “After all, that is what ‘A Cold One’ represents to its core and what led to its creation.
The new beer which is processed to perfection at a microbrewery in the city is now available countrywide.