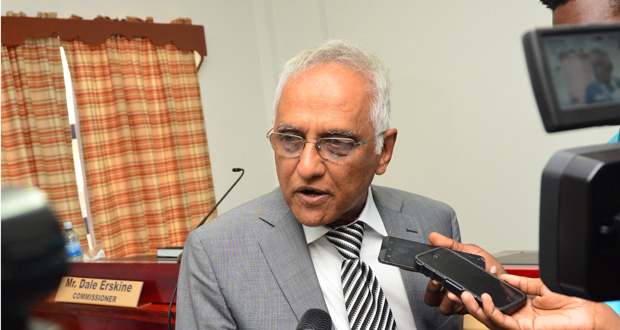 APNU’s strongman Joseph Harmon seems to have a knack for pre-empting decisions of high and independent bodies – such as GECOM and the Courts. On March 5, he misled APNU’s assembled supporters that “you can do the Maths and you know what is (sic) the results”. Later, he did it again with his statement that once the court matters are discharged, the Commission will declare the coalition the winner of the March 2 General Elections. Then, one day before Justice Holder ruled against a request by the Opposition Leader for the tendering of the Statements of Poll and whether the court has jurisdiction in the matter brought by APNU+AFC candidate, Harmon was again at it. This time, he urged the Guyana Elections Commission (GECOM) to have the pending court matter resolved so that President David Granger can be sworn in for his second term. This man clearly believes that he has jurisdiction over every single body – natural, constitutional, statutory and otherwise.

Harmon and Trotman are the co-chairmen of the APNU+AFC campaign. If they did their work properly, they would have arranged to receive Statements of Poll (SOPS) from all the 2,339 polling places across the country on the evening of the elections. As many of the smaller parties did. I know too that at least one of them by 9 AM the day after had completed their tabulation, inclusive of Polling Division 4 – and knew that the APNU+AFC had lost the elections. Harmon and Trotman would therefore know that the numbers announced by Returning Officer Mingo were imaginary and fictitious.

Mr. Harmon deflected the question about Mingo’s numbers by giving the reporter a brief lecture on fraud – a legal concept he says. He is right: politically it is called rigging.

Harmon and Trotman should be thinking how they can dismount the rigging horse which they have saddled and are riding, without concern for the very supporters they have been misleading since the flawed tabulation process in Polling Division 4. If they have a modicum of interest in Guyana they would end the façade, notwithstanding the difficulty – whether out of fear of a backlash from their supporters, or disembarking the long and lucrative ride on the gravy train.

Harmon and Trotman need to reflect on the causes of the elections loss by the APNU+AFC to retain power, and their own role in voters’ dissatisfaction: Harmon’s arrogance in continually and dismissively defending the incompetence and corruption of the APNU+AFC, and Trotman’s signing away the patrimony of the country. Harmon might recall, hopefully with regret and embarrassment, his own dismal rebuttal in the debate on the No Confidence Motion in the National Assembly.

Harmon and Trotman, two lawyers, might also wish to consider, and repent, how they abused the court system to stretch Granger’s term beyond the time set in Article 106 of the Constitution. And whether it did not give the PPP/C and the smaller parties time to organise, raise funds, highlight the APNU+AFC’s shortcomings and emphasise its refusal to voluntarily cede power. Fortunately for Harmon and Trotman, in the matters brought by an APNU+AFC candidate, the Court – wrongly in my opinion – rejected the request for the SOPS to be presented in the case. It was one example of a court’s rejection, on legal technicalities, of relevant evidence in a matter of national and constitutional importance.

I was reading an academic paper yesterday morning on Natural Resources, Electoral Conduct, and Trust in Government, in which the writers make the point “that fraudulent elections erode trust in all governmental institutions, e.g. trust in the president, trust in locally elected councils and trust in the courts” (emphasis mine). After the discredited decision of the Court of Appeal in the NCM case, the Guyana courts need to come to grips with their role and duty to strengthen democracy.

Harmon wants Guyanese to allow the swearing in of his Army contemporary after which APNU+AFC will share the SOPS with them. The country witnessed their shenanigans and their new party song: We Shall Not Be Moved. Democracy does not, even for one day, allow the swearing in of a Government that is the product of an election stolen in broad daylight. Harmon obviously is not thinking clearly, nor does he seem to care for Granger’s place in history. Granger is the first President of Guyana to be removed on a No Confidence Motion. Is Harmon seeking to compound that with him being the first President to be removed on an election petition?

Instead, Harmon and Trotman need to demonstrate the qualities on the APNU+AFC elections flags: Integrity, Honesty, Decency. They should recall that Hoyte is famously remembered for resisting the call by Hamilton Green and others in the PNCR for the cancellation of the 1992 elections when the turnout suggested that the PNC was losing.

There is still time for Harmon, Trotman and Granger to salvage part of their tattered and discredited reputation. It is better to go voluntarily than to be pushed.