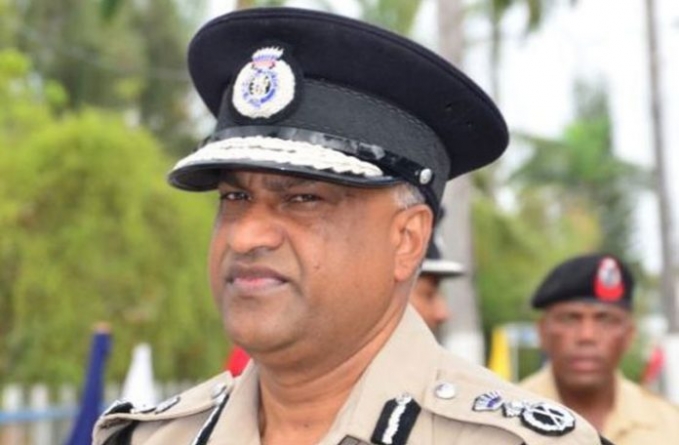 Former Commissioner of Police, Seelall Persaud has come under fire by the Guyana Police Force (GPF) for several accusations leveled to the Force regarding its actions during the breakdown in the final tabulation of ballots cast in the 2020 General and Regional Elections.
On Monday, the GPF sent on a lengthy release reprimanding the Former Commissioner for his position on the matter which they noted reveal a clear bias although non-partisan was claimed.

Persaud had written an open letter to the GPF on March 18, 2020 urging the police to take opposite actions to what they took during the chaos which unfolded at the Guyana Elections Commission (GECOM) command center regarding the tabulation of the Region Four Statements of Poll (SOPs).

Leaders of the People’s Progressive Party/Civic (PPP/C) and other small opposing party – mostly men — had invaded the center with the intention to bulldoze their way into the office of GECOM Chair, Justice (Ret’d) Claudette Singh.

The police were the only persons standing between the irate men and the office of the chair. They were also present when loud arguments and confrontations took place earlier days at the Center and when its doors were shut by order of the Commission and those refusing to leave were escorted out.

In his assessment, Persaud said that “hardship and suffering” would ensue due to the tabulation challenges and blamed the same on the “anti- democratic action of a few in our society”.

In his open letter he urged the Police Force not to act as they did in they did at the Center but to protect citizens from a “tyrannical regime”.

“It is crucial that you do not act as you did at the Region 4 RO’s Office and the Arthur Chung Convention Center when you evicted people who had a legal right to be there and who were advancing the protection of Construction Rights of the Guyanese People,” Persaud said.

“On the other hand, in a tyrannical regime, the Police are employed against ordinary and law abiding people who are delivered into the hands of injustice and impunity. In the latter case, the Police loses its professionalism, independence and Control and the people that suffers includes their relatives, friends and themselves. Is that what we want?”

GPF IS APOLITICAL
In a release on Monday, the GPF stated that it is concerned about the remarks of Persaud which suggest that the Force engaged in the practice of unprofessional and partisan acts.
It pointed out that the intention of Former Police Commissioner was apparently to negatively influence a particular section of the society towards the GPF in general; to sully the image of its senior administration and perhaps to sow discord within the Force and society.

“The Administration of the Force has utmost respect for freedom of expression as enshrined in the Constitution of Guyana. However, any misrepresentation of fact(s) needs to be strenuously addressed and in this regard necessitates perspicuity,” the release stated.
“It should be further noted that the GPF is apolitical and not officious. In that regard ranks were reminded to keep their personal political preferences to themselves, off and away from all police locations, and absent in the execution of their duties.”

The GPF also stated that likewise to Persaud’s position that he stayed away from political activism and expressions during his tenure, so does the current Administration of the GPF.
On different occasions, the GPF Senior Administration has met with leaders of the PPP/C; diplomats, Ambassadors and High Commissioners out of America, the United Kingdom, Canada and the European Union and head representatives of the Carter Centre, Overseas Security Advisory Council (OSAC) and Private Sector Commission.

The GPF said that the aforementioned parties can attest that the Force GPF gave its assurance — and kept the same — that during the Election period the police would maintain its professionalism.

Persaud had also called into question to the acts of the GPF regarding their request that all persons leave the Arthur Chung Convention Center last week following a change in the planned national recount.

Deputy Chief Election Officer (DCEO), Roxanne Myers had informed those in the building that the center would be closed for the night and no recount would be taking place.
Inside the compound of the Center, things escalated when Opposition-nominated Commissioner Robeson Benn refused to leave and took up firm position by lying flat on his back on the floor of the walkway out of the building.

After speaking to Benn sternly and noticing no change, Benn claimed that the police sought to physically remove him from the compound but he held on to the rails.

In the Monday release, the GPF stated that it can rest assured that it operated within the confines of the Law provided for by Section 3(2) of the Police Act Cap. 16:01 and in keeping with the Constitution by virtue of article 197A (4) which empowers the police to maintain law and order for all.

SERVED DESPTITE CIRCUMSTANCE
The GPF said that while Persaud’s letter seems to focus on the two locations, it completely ignores all other efforts of the Force to duo its duty it the challenging of circumstances.
“It should also be noted that the post-election activities where the police exercised a high degree of restraint were not given any recognition by the former Commissioner of Police. Such partisan commentary speaks volumes. There were incidents which saw ranks being subjected to verbal abuse by some persons of civil society. Ranks were also attacked by protestors armed with firearms, cutlasses, wood, iron and other crude weapons which resulted in several police ranks being seriously injured, and hospitalised, while others were so traumatised that professional counselling had to be sought. Also school children were injured and hospitalized, public buses and private motor vehicles were damaged and public roadways were blocked with tyres, lamp poles and other materials which were set on fire,” the GPF pointed out.

The release indicated that throughout these episodes ranks of the GPF continued to exercise much restraint and, through widely aired on both social and print media, Persaud had played a blind eye to the same and chosen other justified matters to highlight which speaks volumes.

Furthermore, the GPF said that Persaud’s remarks on the consequences that are likely to manifest into “hardship and suffering” should be cause for grave national concern based on the manner he expressed the same with “certainty and conviction”.
It rebuked the Former Commissioner for his sentiments which suggested the selective deployment of Officers reminding Persaud that the deployment of Officers has always been the Commissioner’s call.

“This is a phenomenon that can be examined historically and one which has been a part of the modus operandi of successive post-independence Commissioners, without exception,” the GPF said.

“In the case of the two scenarios highlighted and compared by the author i.e. Free Regime and Tyranical Regime, it must be emphasised that Guyana is a democratic State. The GPF, which is an institution of the State, is a professional organisation and in the conduct of its mandate that professionalism is exercised daily which is in keeping with any government that is deemed to be democratic. Notwithstanding the distracting views of the author, the Administration of the Guyana Police Force remains resolutely committed to its motto of ‘Service and Protection’ for all in the maintenance of public safety and security without fear or favour.”