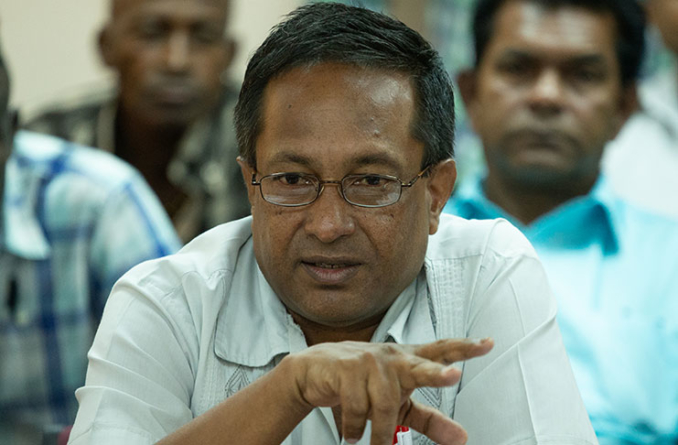 Trade Unionist, Mr. Lincoln Lewis in his letter which appeared in the January 12, Kaieteur News weighed in on the attitude of the Government to sugar workers. Of course, as Mr. Lewis well knows, sugar workers have not been granted any rise in pay since this Government took office. Even longstanding benefits have been suspended, which has only served to further erode their pay levels.

Added to that woeful situation, is the heavy rise in the cost-of-living which pushed their living standards even lower. Mr. Lewis queried whether the “…attitude is driven by some desire for political collateral, thereby allowing for the workers’ right to be trampled, with the intent of embarrassing the government.”

While we do not know the answer to the question, we would find it alarming were Mr. Lewis’ supposition the truth.
The longstanding unionist, goes on, to tell the public that “[i]t is not being said the coalition government has done a stellar job in handling the sugar industry.”

We had to wonder where or what is this stellar job Mr Lewis speaks about. Was it “a stellar job” when 7,000 sugar workers were shown the door without any plan to deal with the social and economic implication of their joblessness? Was it also “a stellar job” when the Coalition decided to borrow $30B only to keep it largely locked away though the industry requires the investment?

Maybe it was “a stellar job” when this caretaker APNU+AFC Government approved the substantial stripping of GuySuCo assets without any consideration for the impact on the industry. Could it have been “a stellar job” when sugar workers remain the only group of the State’s employees whose rates-of-pay are stuck at 2014 levels?

Mr. Lewis himself was present when Mr. Jagdeo addressed the GAWU one-day conference titled “Sugar too big to fail” in September 2018. In his address, the Opposition Leader shared several proposals to turn the industry around. Present also during Mr. Jagdeo’s address, among others, was then Minister of State, Joseph Harmon.

The Opposition Leader was represented too during the three meetings held between December 2016 and February 2017 regarding the so-called consultations on the future of the sugar industry. At that time, the Opposition Leader, through his representative, made some proposals. Of course those of us there were taken aback when the chief Government representative, Mr. Khemraj Ramjattan told us all that if we want a socio-economic study, we should do it ourselves. That outlandish and outrageous statement by the now Prime Ministerial hopeful was captured in the transcript of that meeting and was a clear indicator of the Administration’s attitude and level of openness to suggestions and proposals.

But putting that aside, for the time being, our Union, which has an even more direct link with the industry, has offered the Government several suggestions. Apart from receiving a ‘thank you’ we have never ever heard from the Administration regarding our proposals. We have never ever been told that what we are saying is impossible or improbable. Of course such a response would be just as outrageous as Mr. Ramjattan, as our proposals have been based on several studies conducted with positive results. Moreover, our suggestions were not dissimilar from those recommended by the Government’s Sugar Commission of Inquiry (CoI).

We wish to remind Mr. Lewis, that the President himself, when he engaged GAWU and NAACIE in January 2018, said that his Government and the Unions would work together until the situation of the displaced sugar workers was addressed. Despite the good-faith intentions of the sugar unions, that was the first and last engagement.
The point we wish to make is that the Government was never prepared to hear or never had an open-mind to any suggestion, no matter how workable or justifiable it is and no matter where it came from. There was no sincerity but rather a closed ear, eye and mind to any solution.

In our view, the Government had a clear, jaundiced position to close estates notwithstanding the consequences or ramifications. It was almost a shoot first-ask questions later cavalier attitude that was and continues to be displayed.