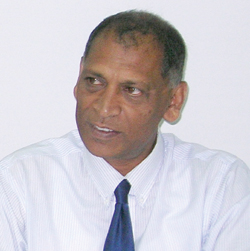 The March 2020 General Election is here. Guyanese, both young and old, for this election would have lived under two governments – the PPP Government up to May 2015 and APNU/AFC between May 2015 and present. Older Guyanese would also have lived under a previous PNC Government also, before 1992. Therefore, for the first time in a very long time, young voters and older voters can vote based on party’s track records. The campaign has shown a dramatic difference in how these two parties have utilised their track records.

It is a telling difference – the PPP pointing out to clear successes when it was in Government vs APNU/AFC’s morbid reluctance to talk about its own achievements. The fact is that the PPP/C in twenty-three years in Government expended $1.6 trillion and proudly points to what it got for that money. APNU/AFC, on the other hand, spent in just five years, almost $1.4 trillion, almost the same as the PPP spent in 23 years, but is hard-pressed to identify what it has achieved for this very heavy spending. The only major projects in the last five years are holdovers from the PPP/C time in Government.

In particular, there were two mega holdover projects. First, the US$150 million Cheddi Jagan International Airport (CJIA) Expansion and Modernisation project started under the PPP/C and was one of the projects savagely criticised by APNU/AFC. In fact, APNU/AFC used its one-seat majority in Parliament to vote against the project, in 2013 and 2014, resulting in work on the project being halted. In 2016, they resumed work, with a reduced scope for the same US$150 million.

Work is still ongoing, APNU/AFC not able to complete a holdover project from the PPP. Importantly, the Auditor General is unable to audit this project because important documents have not been provided. Second, the $43 million East Coast Highway which APNU/AFC commissioned on Thursday, February 27, even though the East Coast Highway is not yet complete. This project was originally budgeted at US$30 million when it started in 2011 under the PPP. In both 2013 and 2014, APNU/AFC voted against this project, resulting in considerable delays. After five years, the project is still incomplete, even though APNU/AFC commissioned it.

Outside of these two PPP mega-projects which they inherited from the PPP, there were also some smaller projects they inherited. The Indian Arrival Monument at Palmyra was a project that started under the PPP and funding was secured through the Indian Government. The design work for the monuments was already completed. After spending more than $50 million of the money, APNU/AFC could not complete the project for the targeted date of May 2016. Instead of fixing the problem, two Ministers – the Ministers of Education and Infrastructure began quarrelling whose fault it was. Eventually, the Indian Government had had enough and took over the project, finally completing it for May 2019. APNU/AFC did complete the East Bank Berbice Road, but that road is already crumbling. They inherited a number of other projects which just needed commissioning. These included the Lima, Windsor Forest, Patentia and other pump stations. But the Hope Pump Station, after five years, is still ongoing.

The most remarkable part of APNU/AFC’s track record is what it omitted from the PPP development agenda they inherited. The transformative Amaila Hydroelectric Project, costing more than US$800 million in Private Sector funding was placed in the dump. Had this project proceeded, Guyana would have benefitted from cheap, reliable electricity. By now, Guyanese would have already been paying less for better electricity. Importantly Guyana’s carbon footprint would have been considerably improved.

There are other transformative projects that have been shelved in the last five years – the Aurora Land Development Scheme would have resulted in another 12,000 acres of land available for Essequibo farmers. The completion of MMA Phase 2, with the extension of the Abary Conservancy to the Mahaica River, would have opened up or improved drainage and irrigation for more than 400,000 acres of land between the Mahaicony and Mahaica blocks of the MMA. The construction of the Johanna Drainage Channel in Black Bush Polder would have created improved flood relief for Black Bush Polder and the Frontlands, with a significant positive impact for almost 50,000 hectares. In addition, they dumped the Parika to Rockstone Road, the so-called Del Conte Road, which would have opened up thousands of acres of agriculture land.

They also dumped the Specialty Hospital Project. This project funded through an Exim Bank loan to the tune of about US$50 million would have transformed further Guyana’s health sector. It would have operated as a private hospital for international patients, but provided subsidised care for local patients whose cost would have been paid for by the Government of Guyana. It would mean a drastic reduction of the need for overseas medical care, but would have ensured that every Guyanese had access to modern, state-of-the-art care right in Guyana. It is unfathomable why APNU/AFC dumped this project.

The Demerara River Bridge was not shelved, but APNU/AFC’s incompetence led to no advancement of this project for which the PPP/C had already sourced funding and for which a feasibility study was completed. APNU/AFC dumped the feasibility study because it was too steep with the DNA and footprints of the PPP. It completed a second feasibility study at a cost of more than $150 million, almost five times the cost of the original PPP feasibility study. However, they also dumped their own study and now five years later we are still at square one, with no progress on replacing the present bridge which has long past its recommended decommissioning.

Similarly, no work has been done on the Linden Highway, another project that was in the formative stages when APNU/AFC took control of the Government. No explanation as to why this project is still not advanced from where it was in May 2015. The same thing could be said for the Linden to Lethem Road, the Corentyne River Bridge, the Deep-Water Harbour and several pump stations for Regions Two, Four, Five and Six.

They also discontinued some popular social programmes, such as the $10,000 cash grant for school children, which would have meant $50,000 per child by 2020, had the programme not been discontinued. They never removed subsidies for pensioners, like the water waiver fees and the subsidy for electricity. The One-Laptop Per Family Programme was discontinued. The solar panel programme for hinterland and under-served communities was also abandoned. The one-month annual bonus for the Disciplined Services was taken away. The housing programme essentially was abandoned also.

There was a clear vision and plan that the PPP left on the table. APNU/AFC decided to abandon and tinker with most of the plan. In its place is no plan. Now that the 2020 elections are here, they still do not have a plan. A reading of their so-called manifesto shows a disjointed cut-and-paste job, no vision, no plan.