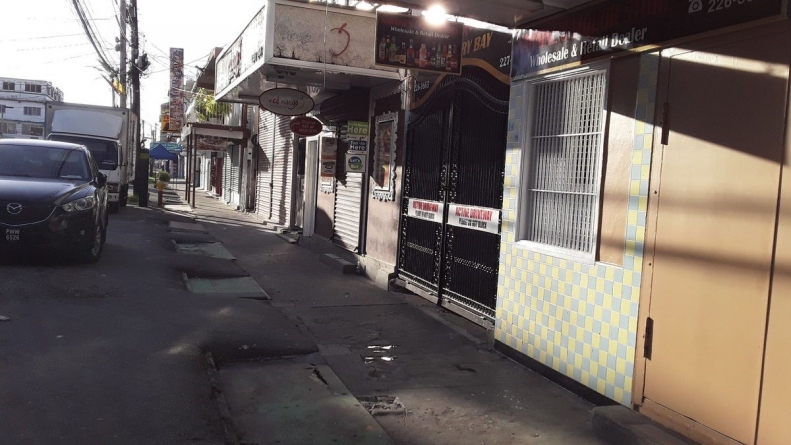 Many businesses in the capital and other parts of the country remained closed yesterday as the nation awaited the results of Monday’s general and regional elections.

Since the close of polls on Monday evening, a tense atmosphere has blanketed Georgetown, which is usually abuzz with activity.

Private Sector Commission (PSC) Chairman Gerry Gouveia yesterday afternoon called on the Guyana Elections Commission (GECOM) to expedite the counting process and announce the results of the elections. He said this was necessary for the country to return to a state of normalcy as businesses need a non-threatening environment.

“…if GECOM do not deliver to the people, this level of uncertainty and tension will continue. We need them to get it over with quickly,” he said.

Some previous elections have been marred by post-electoral unrest, including the destruction of a number of businesses.

Gouveia disclosed that the PSC has received reports from across the country of businesses remaining closed after Monday’s public holiday for voting. He noted that the PSC has not encouraged any business to remain closed and the decision seemed to have been made by individuals.

“The closing of the businesses is not a call by the Private Sector Commission or the Chambers. It is people who are responding to individual paranoia and that is why it is important in the national interest that GECOM [announce the results],” he said.

A drive around the city by this newspaper yesterday revealed the slowdown or in some cases complete stoppage of business activities. Traffic flowed smoothly as the streets were not congested as they usually are. At the markets, stalls were also closed but roadside vending continued as per normal. Some supermarkets were also open and taxi services were also in operation.

Some business places have also taken precautions and installed ply-board over the windows of their buildings to prevent any breakage.

The SOL gas station’s mini mart on Regent Street is one of the business places with ply-board installed to cover its windows, while it was open as usual. Workers indicated that while the owner gave no clear reasoning for the measure, they believed it to be a precaution. The windows were covered on Sunday, hours before Election Day activities commenced.

Gouveia pointed out that the apprehension by the business community came as a surprise as businesses gave no notice of their intention to remain closed.

“We called for Monday the second to be a holiday and we were very pleased that the government declared it a national holiday. We did not ask for Tuesday to be a holiday because we did not think it was necessary and so we were actually surprised by the level of apprehension by the business community but it was widespread today (yesterday),” he said.

He added that they were confident that should there be any post-election unrest, the police force could handle the situation.

In response to the concerns by businesses over the delay in the announcement of the results, Gouveia said the PSC has been reaching out but he emphasised that GECOM needed to make the results available expeditiously. “We need them to get it over with quickly,” he added.

Apart from business activity, the turnout at schools across the country was also relatively low as parents opted to keep their children at home. This resulted in most schools closing after the morning session.