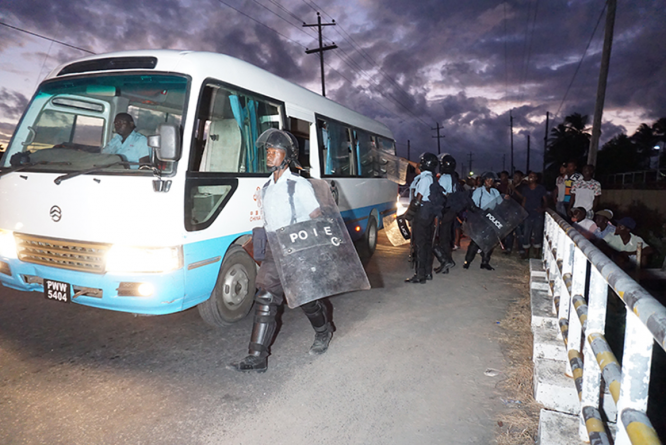 A Peaceful start to the electoral process on the East Coast of Demerara (ECD) ended with tension on Monday, as supporters of the incumbent A Partnership for National Unit and Alliance for Change (APNU+AFC) coalition and those of the People’s Progressive Party/Civic (PPP/C) clashed near a polling place at Mon Repos.

Despite comments about a smooth process, there were accusations of attempts to “interfere” with the electoral process at the Mon Repos Primary School polling place and at polling places at LBI and Strathspey, during the General and Regional Elections, on Monday.
The APNU+AFC’s agent for the ECD, Attorney General (AG) Basil Williams, noted, in an invited comment, that there were complaints from Mon Repos about a known politician handing out Identification (ID) cards.

This matter, he said, was reported to the police and it was being investigated. In a video posted on the APNU+AFC’s Facebook page, AG Williams and Minister of Social Protection, Amna Ally, were seen visiting a polling station at the Mon Repos Market Tarmac, where they confronted the PPP/C’s ECD agent, Anil Nandlall, about the issue of “handing out” ID cards. Ally could be heard telling Nandlall that he was named as one of the persons distributing ID cards to persons.

Nandlall during the confrontation, however, denied engaging in such an act and was advised by AG Williams to let GECOM officials deal with the matter. Supporters of the APNU+AFC coalition upon hearing about the issue, made their way to the railway embankment road at Mon Repos, just a few yards away from the polling place, to observe the process and ensure that the alleged, illicit issuance of ID cards did not persist.

“Step closer, come closer!” shouted supporters from both sides, as they continued the verbal exchange. At one point the residents of Mon Repos even started shouting “PPP, PPP!”
Supporters of both parties said they were not willing to move until the ballots were counted and the ballot boxes were moved from the polling stations at the Mon Repos Primary School polling place. After the close of polls at 18:00hrs, supporters stood their ground, causing the GPF to send in riot police, just to be prepared in the event of a physical clash. Riot police were armed with pellet guns, rubber bullets and teargas. The crowd, however, started to lessen after 20:30hrs and the exchanges became less.

Chief Elections Officer (CEO), Keith Lowenfield, said the Guyana Elections Commission (GECOM) was aware of the matter, but the preliminary investigations were being done by the GPF. “I think GECOM will have to await the current investigations, the count is going on and there is a standoff among party constituents, the police are present and I am sure reports will emanate from the police and our own presiding officers,” said Lowenfield during GECOM’s first post-elections press conference at the media centre, on Monday evening.

In addition to the claims of distribution of ID cards, Lowenfield said the commission received reports that an individual tried to vote twice at a polling station on the ECD. These matters are, however, being investigated by the relevant authorities.