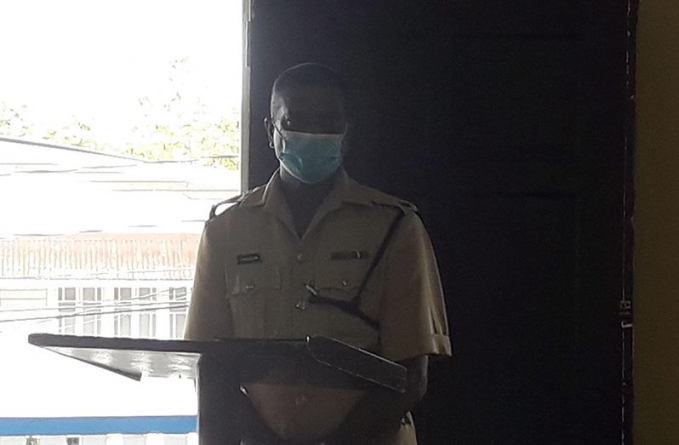 WITH Police Commander of Region Six Jairam Ramlakhan launching his ‘Team Policing’ initiative in collaboration with the business community, the region has begun to witness a reduction in serious crimes.

This disclosure was made during a recent interfacing with Regional Chairman David Armogan along with the mayors of the three townships, heads of the respective Joint Services, President of the Berbice Chamber of Commerce, representatives of the Guyana Revenue Authority, Customs and Trade and senior divisional senior officers, among others at the Central Police Station oardroom.

The invitees were informed of increased policing activities which commenced on November 15 and will conclude on January 15, 2021.
Divisional Detective Assistant Superintendent E. Baird in his presentation disclosed that while there was an eight per cent increase in murders, there was a 48 per cent reduction with respect to robbery under arms and a 60 per cent decrease in robbery with violence.

Robbery with aggravation increased by 50 per cent, while reports of rape also saw a 48 per cent increase.
Assistant Superintendent Baird also noted that during the period under review, there was an increase in breaking and entry offences, mainly by juvenile offenders.

It was also noted that repeat offenders were the main perpetrators of these offences.
Analysing the statistics, Baird posited that the decrease in some offences was due to improved community policing relations.
“We have conducted over 40 raids targeting drug houses and known characters and persons suspected to be involved in criminal offences. We have had over 25 people charged with trafficking and being in possession of narcotics,” he said.

More raids and roadblocks and the targeting of drug houses, along with riverine and maritime patrols and intelligence gathering will continue.
With respect to traffic, Deputy Traffic Chief Inspector Ramnauth highlighting incidents within the Number Three sub-division, said during October 16 to November 16, there were 425 cases with one serious accident and two cases of damage.

Meanwhile, Mayors Winifred Heywood, Chattergoon Ramnauth, and Winston Roberts, representing the townships of New Amsterdam, Rose Hall and Corriverton respectively, applauded the initiatives by the police command team in the region.
President of the Berbice Chamber of Commerce, Errol Azar reminded the police of the chamber’s gift of nine security booths, which should be placed at strategic points in the New Amsterdam township.

In brief remarks, Regional Chairman David Armogan recognising the limitations of the Guyana Police Force in its fight against crime, pledged the region’s vehicle to be of assistance in time of need.

“I know you are short of resources. I know you are incapacitated with respect to vehicles, which makes the work a bit more difficult. We are committed. Commander Ramlakhan is free to call us and once we have a vehicle, we will help,” he said.

The unveiling of the two-month Christmas Policing Plan in New Amsterdam is aimed at minimising the occurrence of criminal activities, traffic accidents and traffic congestion and to foster closer relations with members of the public.

Over 300 ranks, inclusive of neighbourhood and community policing groups will be deployed on the roadways of the ‘Ancient County’ in a bid to allow citizens to experience an accident-free holiday period.

There is also provision for marine patrols. The ranks have access to one 35-foot fibre-glass boat with a 90- horsepower Yamaha outboard engine for riverine checks in the Canje Creek and Berbice River areas.