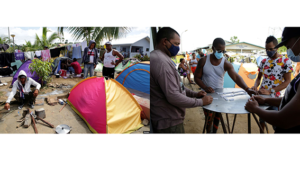 After almost two weeks of being on a pier in western Suriname, in Nickerie, several hundred Cubans were informed that they must abandon the site or else they would be evicted, even by force, if necessary.
According to the migrants’ versions, in a meeting with the head of the police and the government of Nickerie, they were informed that Guyana has officially denied their entry into the country.
“The meeting passed without incident, very organized and in the midst of a strong military presence, even with uniformed agents carrying long weapons,” Yissel, a young woman who has kept collecting and spreading the word on social networks, told Radio Televisión Martí.

Faced with the threat of the authorities, some Cubans from family groups with minors decided to abandon the sit-in and return to Paramaribo, the capital, more than 200 kilometers from Nickerie.
“From a group of 462 people who started camping on November 30, between 200 and 230 remain on the dock,” Yissel reported, according to news from radiotelevisionmarti.com.
They still keep alive their hope that the ferry service connecting that country with Guyana will resume.
Guyana cancelled plans to reopen the ferry service with Suriname which was scheduled for yesterday, fearing a deluge of Cubans and others.

Representatives of the Surinamese government said that before acting, they would once again consult the central government in the capital. So far, they have not responded to the migrants.
“We are determined not to leave the site voluntarily. They want to take us back to Paramaribo, the capital. There we have nothing to do, we have no place to live, or resources for a rental,” said the young woman.
The group intends to start a caravan in Guyana to Brazil, Peru, Ecuador, Colombia and cross the Central American isthmus to Mexico.

Last weekend the word spread that Guyana had restored the ferry service, and that the Cubans would be transferred to that country in groups of 20.
“Everything has been a lie, the uncertainty continues. Our needs persist, although we receive very little help from the government of Suriname, including food,” said Juan Norgis Alonso.
However, the esplanade on the dock that served as support for dozens of multi-coloured tents, grocers and makeshift kitchens, has been cleaned.

“They want us to get out of here, because we collected everything, tents and belongings. We have been sleeping on the floor for two days, out in the open. This is a jetty and we are passengers waiting for the resumption of the service,” declared Yissel.
For the moment and at least three times a day, Cubans demand that they be allowed to continue their journey. They also put tape in their mouths and do sit-ups.
An email was sent to the Surinamese Ministry of Foreign Affairs seeking information on the case and as of press time, there was no response.

This author has not added a biography. Meanwhile 1953 Movement has contributed 11893 posts. Click here to view them.