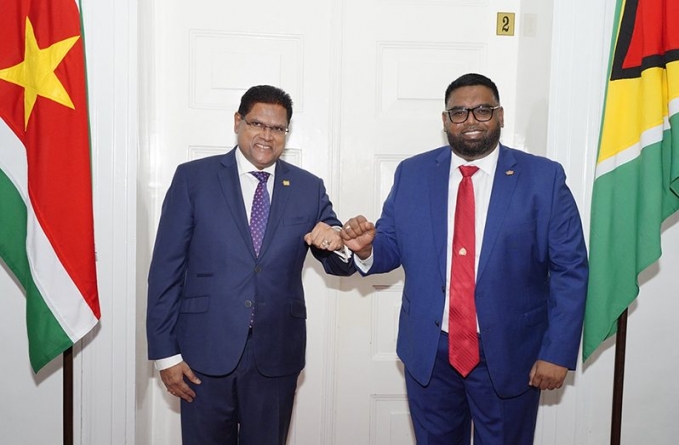 BOTH Guyana and Suriname are anticipating massive economic advancement within the coming years because of their new-found oil wealth, so, instead of being competitors, the two countries will “join hands” and develop together through a physical connection in the form a bridge over the Corentyne River.
Bridges, roads and other forms of infrastructure are metaphorically referred to as “arteries to development”, catalysing economic growth by increasing trade, transportation and other economic activities.

In a significant step towards physically linking the two countries, President, Dr. Irfaan Ali and his Surinamese counterpart, President Chandrikapersad Santokhi finalised an agreement for the construction of a bridge across the Corentyne River.

The official Memorandum of Understanding (MoU) for the construction of this bridge was signed by Guyana’s Minister of Foreign Affairs and International Cooperation, Mr. Hugh Todd, and Suriname’s Minister of Foreign Affairs, International Business and International Politics, Mr. Albert Ramdin, in the neighbouring Dutch country’s capital, Parimaribo, on Tuesday, one day before Suriname celebrated its 45th Independence anniversary, and both countries marked 45 years of formal cooperation.

Both countries believe the bridge will be the ‘gateway’ to economic prosperity, and greater connection and relations as neighbours.
President Ali, who is on a three-day state visit to Suriname, said during a press briefing that the bridge, once constructed, will serve as a permanent, physical link between the people of Suriname and Guyana, and, by extension, the rest of South America.

There will be enormous benefits in tourism, transportation and trade, the President said, adding: “The proposed road alignment will also create, within its vicinity, possibilities for free trade zones and enhanced land value, which will not only reduce the cost of doing business, but improve the ease of doing business.”
President Santokhi was also optimistic about the potential project, noting that: “The bridge over the Corentyne River is not only important to facilitate the movement of persons and goods, trade and cross-border cooperation, but it also symbolises a transition from the oath to a new era, where there is a well-being and prosperity of the people, democracy and rule of law.”

Plans for the construction of a bridge across the Corentyne River were initiated in August, when President Santokhi travelled to Guyana for President Ali’s inauguration.
Since then, both countries have signalled a mutual desire for an invigorated relationship through enhanced and sustained dialogue, and a practical and effective programme for cooperation.

“We have had the opportunity to review progress made on issues we agreed on in August, and we discussed several other areas for possible cooperation. We have taken the important step by formalising a new cooperation mechanism,” said President Ali.

An agreement for strategic dialogue cooperation was also signed by the Foreign Affairs Ministers of both countries, thereby paving the way for a new cooperation mechanism, which establishes a framework for dialogue to guide future collaborative efforts aimed at improving the lives of citizens.

This agreement followed the first meeting of Guyana and Suriname’s Strategic Dialogue and Cooperation Platform (SDCP), which was formed in October this year.
Through the new agreement, there will be a stronger foundation for a relationship between the two countries. This will be based on mutual respect and development.
“We will focus on integration and regionalisation in an open and transparent manner, which is results-oriented, forward-looking and based on trust and joint actions. There are negative issues, but when we convert energy in the positive direction, only the country and people will benefit,” said President Ali.

BUSINESS FACILITATION
In addition to the bridging of the Corentyne River, which will serve as a conduit for such development, both countries agreed on the creation of the Guyana-Suriname Business Facilitation Unit, to manage and facilitate collaboration between national private sector bodies.

The Unit is tasked with promoting investment and business opportunities in agriculture, tourism, fisheries, oil and gas, and other sectors.
“Yes, we are small countries, small population, small human resource base, small investment portfolio, but if we bring synergy to what we do, then we can have greater benefits, greater local content, and more resources flowing into the local economy,” said President Ali.

He assured his audience that the Government of Guyana remains committed to the pursuit of the bilateral initiatives agreed upon, adding: “We have shared challenges and threats, but it is equally true we have shared opportunities that can be realized, if we have greater cooperation, collaboration and integration. This is what would lead to lasting sustainable relationship that would benefit the people of our countries.”

President Santokhi, too, was convinced that there will be great strides in advancing development in both countries, in the coming years.
“With recent oil findings in both countries, and mitigation of COVID-19, the momentum is there to target our focus on sustainable development and solutions for existing common challenges of two developing countries,” said the Suriname President.