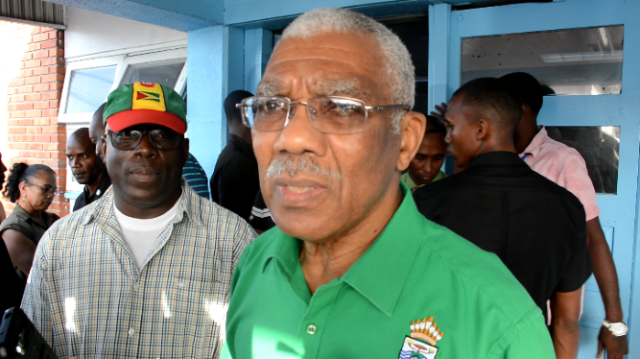 President David Granger, in addressing the current electoral impasse, said should the Guyana Elections Commission (GECOM) and the Judiciary be allowed to execute their functions without inference, a solution to current challenges facing the country would be forthcoming.

It has been 19 days since thousands of Guyanese went to the polls but attempts by the elections commission to declare the results have been met with one litigation after another. Amid claims of a flawed electoral process, President Granger and Leader of the Opposition, Bharrat Jagdeo, had agreed to have the Caribbean Community (CARICOM) supervise a national recount of all the votes cast on March 2, but that too was blocked by an injunction filed in the High Court last Tuesday (March 17).

In an address to the nation on Friday night, the Head of State, who has repeatedly iterated his respect for the Constitution, laws of the country, Judiciary and GECOM, said the independent institutions must be allowed to carry out their mandate. “I have iterated, always, my commitment to respect the Constitution of the Co-operative Republic of Guyana, to protect the integrity of the chairperson and members of the elections commission and to obey the rulings of the courts. I am confident that these institutions, once allowed to function without interference, will provide a solution to the present situation,” he told the nation.

President Granger, who led the APNU+AFC Coalition into the elections as the Presidential Candidate, said all and sundry must demonstrate respect for the elections commission as it executes its function, and desist from attacking Justice (Ret’d) Claudette Singh, the Chair of GECOM, and the other arms of the elections commission. “The elections commission has the sole authority for the conduct of general and regional elections and must be allowed to function independent of political interference, instruction and influence,” President Granger said.
In the interest of transparency and accountability, the Head of State had endorsed moves by the Chairperson of the Caribbean Community (CARICOM), Mia Amor Mottley, to assist Guyana by sending a high-level delegation to oversee the recount of ballots cast at the elections, but this initiative has been temporarily blocked in the High Court.
“I am disappointed that the high-level team of five departed Guyana this week after efforts towards a ‘total national recount’ were stymied following the granting of an injunction by the Supreme Court. This matter remains before the court,” he said, while noting that the country’s democracy allows for interested parties to approach the Supreme Court of Judicature for judicial review of the electoral laws.

The Head of State has maintained that the electoral process must be credible. “Free and fair elections are essential to representative democracy,” he told the nation.

Even as the nation awaits the decision of the High Court but more importantly the decision of GECOM, President Granger is calling on Guyanese to allow peace to prevail. “I urge all Guyanese, therefore, to respect each other as we work together to build a cohesive nation. Violence in any form, at any time and in any place, particularly against innocent school children, must be condemned strongly. The violent attacks on innocent children and law enforcement officers in the Mahaica-Berbice Region (Region Five) were hateful acts of hostility. I urge all citizens to be calm and patient as we await the ruling of the Supreme Court and the final declaration of results by the elections commission,” the Head of State told the nation.

While the March 2 Election was smoothly executed by GECOM, the electoral process was brought into disrepute during the tabulation of the votes in Region Four. To date, the returning officer for that electoral district, Clairmont Mingo, has made two declarations – the first one was invalidated by the High Court due to a breach of the Representation of the People Act. On Friday (March 20), another application was filed in the High Court to set aside the second declaration of votes by Mingo – that case is currently before High Court Judge, Franklin Holder.