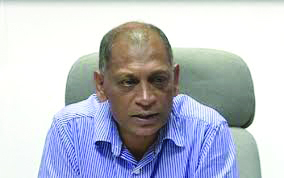 Dear Editor,
An election is being stolen in the full view of everyone, including local and international observers. People are being cheated of their inalienable right to freedom and democracy, for free and fair elections. People know they are being cheated; they feel cheated. They are outraged and are refusing to be cheated of their right by docilely sitting down. There are already sporadic uprisings. One person is now dead. David Granger wants power so badly that this unrest and whether it is one death or more are only collateral damage, no matter if blood is on his hands. He wants power, nothing less, no matter the consequences, no matter if blood is spilt, no matter if we are a rogue State. David Granger would rather be the President of a rogue State than give up power.

But David Granger cannot steal the elections and cannot deny people their rights by himself. He needs collaborators and puppets to do his dirty work. Make no mistake, David Granger is the puppet master, no matter how much of the veneer of decency, honesty and integrity he covers himself with.

As the puppet master, he has hijacked GECOM which is his main collaborator and puppet. The Returning Officer (RO) and his staff in Region Four, willingly or unwillingly, is one of the collaborators or one of the puppets, it really does not matter which he is, the end result is that Granger’s dirty work is being done. This RO has already illegally declared the results of Region Four with fictitious numbers, bearing no reality to the actual votes in Region Four.

In effect, the Region Four RO, by creating fictitious numbers to steal Region Four, has stolen the entire March 2, 2020 elections for David Granger and APNU/AFC. He did so in front of the whole world. The other ten political parties were present, not just their representatives, but their leaders. Local observers and international observers, including former Prime Ministers, were present. The RO shamelessly declared the results, barefacedly, brazenly, he did not care.

He was in direct collaboration with Mr Granger.
The Chief Elections Officer (CEO) has been playing “good cop, bad cop”. He pretends to be helpful, pretending all he wants is to adhere to the rules, but condones and even directs wrongdoings. He is waiting for the moment of his opportunity to twist and dance to the tune of the puppet master. On receipt of the Region Four declaration, he is prepared to hand over a report declaring APNU/AFC the winner.

He is prepared even though he knows firsthand that the spreadsheet is fictitious. He himself publicly exposed the blatant thieving of the votes by asking representatives for a random set of Statements of Poll (SOPs) and checking against the spreadsheet, finding all of the SOPs prove the spreadsheet contained bogus numbers, increasing votes for APNU/AFC. The CEO has long shown he is compromised and singing and dancing to the tune of the puppet master.

This beautiful country is still desperately hoping that the admiration and respect they have shown for Justice Claudette Singh is not in vain. She has shown the capacity to bring things back. She has done enough to demonstrate she is not under the full control of the puppet master. But the truth is she has been largely missing in action as her staff, led by her CEO, has clearly stolen the elections. When the open thieving was done on Thursday, Justice Singh was totally missing in action (MIA). There is the unanswered question of whether she was MIA by choice or whether she was virtually held hostage by representatives of the puppet master.

Just when Guyana needed Justice Singh the most, just when GECOM, the entity she is in charge of, was stealing the election, she was not visible, she was not in charge, she was inaccessible to the political parties, except APNU/AFC. She was inaccessible to the observers. Thursday was a travesty and the whole world has said so. All that day, Justice Singh was either in hiding or forcibly held in her office.

But all is not lost. There is still time to bring Guyana from the brink, to salvage the March 2, 2020 General Elections. No one is asking for a favour. Everyone, except David Granger and APNU/AFC, is asking for GECOM to follow the rules, adhere to the laws of Guyana. All Justice Singh needs to do is direct her staff to complete the Region Four verification and tabulation in the same manner as they did in the other nine regions of the country.

In any case, there is a request for a total recount of the votes in the boxes. Justice Singh can order that the laws be obeyed. If this is done, we will see that the PPP won the elections because APNU/AFC could not win big enough in Region Four to overcome the PPP’s advantage in the other nine regions.

Every now and then, a rare, very rare opportunity is presented for a person to determine the immediate and distant future of a country. While every citizen has a chance right at this moment to make a difference, few people have such a definite opportunity to make a difference, to determine the immediate and distant future of our country, as Justice Singh. Guyana can stay on the road to freedom and democracy and start to benefit from an economy buttressed by oil. Justice Singh can assure this.

Foreign diplomats are standing up for Guyana, trying to guide Guyana along a path that takes our country to the long-held destiny of El Dorado. There are foreign and local observers who see the ill-advised path we are on at this time. The puppet master is ensuring that Guyana’s sordid electoral history between 1968 and 1992 is restored. That disgrace we ended in 1992.

The partnership between Guyanese and international partners is presently working to stop the puppet master and his team from stealing Guyana’s elections, to stop Guyana going back to that shameful time.

Hope is still alive. Even as APNU/AFC, GECOM and the puppet master carry out their evil plan to steal Guyana’s elections, there is a movement to stop them.