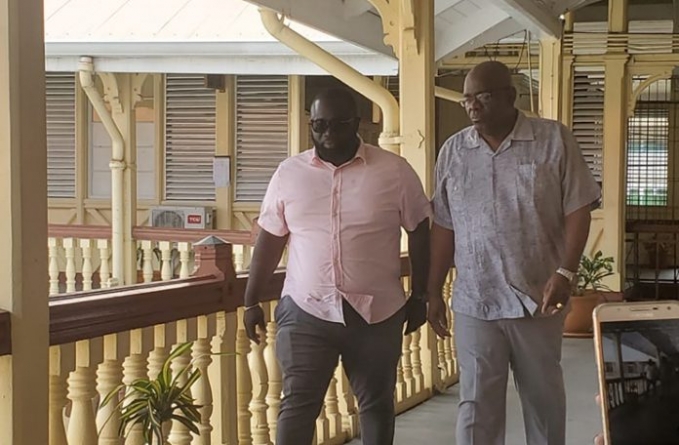 CONTRARY to reports by the People’s Progressive Party/Civic (PPP/C) and other opposing political parties, Guyana’s Chief Elections Officer (CEO) Keith Lowenfield has said that Statements of Poll were used to tabulate the votes cast in Region Four (Demerara-Mahaica) during the General and Regional Elections and not a spreadsheet.

And with the votes already declared for all 10 Electoral Districts, Lowenfield informed the High Court that his report is now with Chairman of the Guyana Elections Commission (GECO), Justice (Ret’d) Claudette Singh. The Chief Elections Officer was at the time presenting his Affidavit in Defence in the case brought against himself, GECOM and its Chair by Ulita Grace Moore, a private citizen who wants the High Court to bar the Commission from facilitating a National Recount of all the votes cast during the March 2 Elections.

While acknowledging that the initial declaration made by Region Four’s Returning Officer Clairmont Mingo was set aside by Chief Justice (ag) Roxane George-Wiltshire, Lowenfield told the High Court that during the final tabulation exercise, SOPs were used at all material times.

He explained that after the Chief Justice’s ruling on March 11, 2020, the Returning Officer, on the morning of March 13, recommenced the tabulation process to ascertain the votes cast for each List of Candidates. That, he said, was done in the presence of the persons who were entitled to be there, as outlined in Section 86 (1) of the Representation of the People Act. Denise Babb-Cummings, Shefern February, Carolyn Duncan, Tandieka Hytimiah and Kirk Gravesande were the Election Officers present at the time at the Office of the Returning Officer at Ashmin’s Building. “The Election Clerks, in the presence and under supervision of the Returning Officer, took turns, and called out the votes cast for each List from each Statement of Poll in the presence of persons entitled to be there,” Lowenfield explained, adding: “As the votes from each Statement of Poll for the List of Candidates cast were read, the said votes were imputted into the Commission’s computer by Kirk Gravesande.” He told the High Court, in his Affidavit in Defence, that the process continued until 10:20hrs when a Court Marshall served the Returning Officer with contempt proceedings.

According to Lowenfield, while the Returning Officer proceeded to the High Court, the Elections Officer continued the tabulation process, and at all material times used SOPs. However, at around 11:00hrs that day, the Returning Officer brought the process to a halt.
“At no time during the process of ascertaining the votes cast for each List did the Returning Officer, or the Elections Clerks, read from a spreadsheet, or called out votes from a spreadsheet purportedly extracted from the Statements of Poll. At all times, votes cast were read from the Statements of Poll,” Lowenfield submitted.

Later that day, he said, the tabulation process was then moved to GECOM’s Headquarters, where three scanners with corresponding laptops were set up to facilitate the display of the SOPs, as ordered by the Court. The Chief Justice had made it clear that the Returning Officer must produce the SOPs during the tabulation of votes for his Electoral District.
Lowenfield told the High Court that once the process recommenced, the SOPs were displayed for the party agents and observers to view, in accordance with the Representation of the People Act.

“The Statements of Poll were scanned in the presence of persons entitled to be there and displayed. All the Statements of Poll were picked up, one after the other, in the presence of the persons entitled to be there, and were scanned in their presence, and also displayed in their presence on the screen set up for that purpose… At no time did the Returning Officer and the Election Clerks read or call votes cast for the List of Candidates from a spreadsheet,” he maintained. According to him, any allegation to the contrary is false and malicious.

Nonetheless, he said that at the end of the tabulation process on the night of March 13, the Returning Officer declared the votes cast in favour of each List of Candidates, but that that, too, was met with objection by the PPP/C and a number of small opposing political parties.
In fact, he said that a total of eight (8) political parties had made requests for a recount on March 14, but that those requests were disallowed, due to their failure to comply with Section 24 (2) of the Representation of the People Act. He gave as a typical example of the non-compliance with the Act at reference the PPP/C’s appointment of four (4) agents, when Section 24 (4) of the Act provides for only ONE agent at a given time.

He submitted that while the PPP/C and other parties have alleged that the Returning Officer breached Section 84 of the Representation of the People Act, it is his belief that the Act was followed “scrupulously”.

THE RECOUNT
Lowenfield said that while President David Granger and Leader of the Opposition, Bharrat Jagdeo, on March 14, agreed to a National Recount under the supervision of the Caribbean Community (CARICOM), he only knew of the agreement hours after it was reached. At the time (15:30hrs), he said, he and the Chair of GECOM were at the Diamond-Grove Magistrates’ Court.

“By this time, I had already prepared my report, manually and in electronic form, for the benefit of the first-named Respondent, pursuant to Section 96 of the Representation of the People Act, and sent same to the second-named Respondent (the GECOM Chair),” the Chief Elections Officer informed the court.

Nonetheless, Lowenfield said he was instructed to facilitate the National Recount, and, in keeping with that instruction, made every effort to facilitate the process until they arrived at a stumbling block. The CARICOM high-level team, which had arrived to supervise the process, had informed him that in an effort to give legality to their work, GECOM must first gazette the order, and it was then that legal advice was sought from the Chief Parliamentary Counsel, Charles Fung-A-Fat.

In offering his legal advice, the Chief Parliamentary Counsel informed GECOM that it was unlawful to delegate its function to the CARICOM high-level team. GECOM was subsequently served with an injunction, thereby blocking the recount from taking place. And with the legal challenges faced, the CARICOM team withdrew from the process.
Lowenfield told the Court that it is his belief that GECOM is not entitled, in its exercise of its power under Article 162 of the Constitution and the Representation of the People Act, to direct the Returning Officer to revisit the objections which were delivered following the final declaration.

But while the Chief Elections Officer believes that GECOM cannot instruct the Returning Officer to facilitate a recount, the Chair of GECOM, in her Affidavit in Defence, told the High Court that she remains committed to a transparent process, as was indicated during her appearance before the Chief Justice on March 13. Justice Singh, who is represented by Attorney-at-Law Kim Kyte-Thomas, told the court that she had given the Chief Justice her word.

“I indicated to the Court that the tabulation process was in progress, and that should there be discrepancies in the Statements of Poll, as called by the Returning Officer and those held by political parties, then the discrepancy should be noted, and at the end of the process, if they could not be addressed, then I will endeavour to facilitate a recount, at the level of the Commission,” the GECOM Chair pointed out to the Court as she renewed her position.