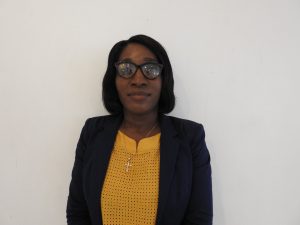 Former acting head of the Special Organized Crime Unit (SOCU), Althea Padmore, is alleged to have submitted a forged university degree to obtain her position at the unit.

That unit, which falls under the Guyana Police Force, has been accused of being wielded as a weapon by the Coalition administration, which lost the recent elections, to target the then opposition members. A number of them, including the current President Irfaan Ali and Attorney General, Anil Nandlall, were charged.
Padmore purported that she held a Master’s of Science degree with honours in Business Administration from the Ashworth College.

According to a copy of Padmore’s certificate, which Kaieteur News has in its possession, was signed by Gary M. Keisling, former Chief Executive Officer (CEO) of the Georgia, US-based Ashworth College.
However, Keisling passed away since 2012. Extensive research by this newspaper showed that Keisling had succumbed due to pancreatic cancer in his home, making it impossible for him to have signed the certificate that was awarded to Padmore in 2015.

Padmore had replaced former SOCU’s Head, Assistant Commissioner Sydney James on July 19 last year.
James was sent on leave following a special audit by the Police Force.
SOCU is an arm of the Guyana Police Force (GPF) that was established to probe corruption and money laundering.
It would conduct investigations on the findings of several forensic audit reports of State agencies that were commissioned by the previous Coalition administration.

Recently, Attorney General Nandlall, who has taken up his old position, made it clear that records will show that SOCU has done very few money laundering investigations and laid very little charges. “Who did they charge for money laundering? They have charged me”, Nandlall said.
Kaieteur News would have reported on several People’s Progressive Party (PPP) officials being charged due to the unit’s investigations of those audits.

The government has talked about reforming the unit and would have also pointed out that SOCU itself has lost its focus completely.
Recently, it was Nandlall who disclosed that he has evidence of a former head of SOCU submitting forged qualifications. (see link story at https://www.kaieteurnewsonline.com/2019/10/05/ppp-vows-to-restructure-tainted-socu/)

The organization has since been handed a new head, Senior Superintendent, Fazil Karimbaksh, who had previously served as Commander for the ‘E’ Division in Linden-Kwakwani, is expected to take up the reins of the entity shortly.