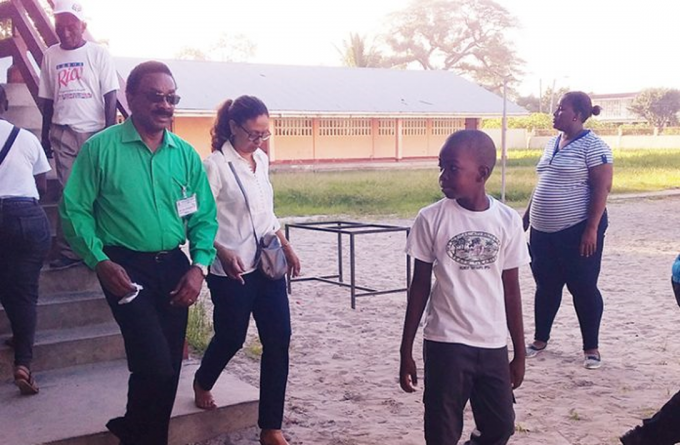 With approximately 11 polling stations listed under Region Four’s ‘Georgetown North’, the voting process at these locations was carried out in a manner that was smooth and highly organised, with voters having mostly good things to say about their experience.

Dozens of persons turned out at the various polling stations even before 06:00hrs, when they were expected to be opened. The process reportedly got off to an early start at all of the locations with all requisite staff in place, and there were hardly any hiccups in this section of the city.

In this district, Guyana Chronicle first visited the St. Gabriel’s Primary School where a total of 1,699 persons were listed to vote at seven polling stations. Here, the line of voters stretched way outside of the compound with a mixture of voters, notably, many young people making up the crowd.

But for one woman, things could have gone a little better when it came to the provisions in place for the elderly to vote; they were given special treatment in the sense that they did not have to join the line. She was of the opinion that the process at this location could have been completed faster had a special line been designated for the elderly. Another voter here observed that while it was a very easy process, it was slowed down somewhat because there were many new GECOM staff.

Between the St. Ambrose Primary School and Head Start Nursery in Alberttown, there were eight polling stations with a total of 2,628 persons listed to vote there. Here, too, the process was organised and moved along swiftly. One 68-year-old, in all smiles, said he found the process very simple and the officers stationed there were very helpful in explaining things to him. “They put me in front of the line, so I got through very fast,” he remarked. The crowd here was also full of youths, especially young men.

A total of 960 persons were listed to vote at two polling stations at Winfer Gardens Primary School on East Street, and the process here was found to be slow. One young voter said he arrived at the location around 06:00hrs but finished voting until about 08:30 hrs.

The process was also a bit slow at the Christ Church Secondary School, where 931 persons were listed to vote at three polling stations. While one voter described her experience as a very straight forward process, another said she found it a bit slow because staff at the facility had to take their time to explain certain things to other voters.

Even though she took approximately one hour to cast her ballot, she still thinks that the staff did a good job.
Three polling stations were available at St. John’s College on Waterloo Street where 874 persons were listed to vote. People turned up at this location even before 06:00hrs to vote. The process here was just as smooth as the one held at Bishops’ High School where 615 persons were listed to vote, and at Kingston Secondary School where 546 persons were on the list to vote at two polling stations.