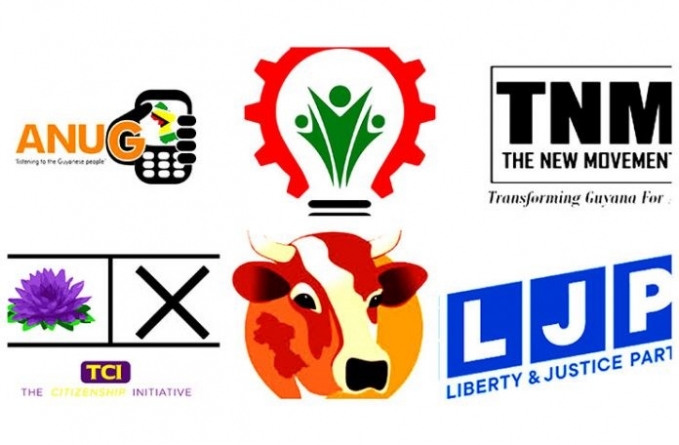 Preliminary results provided by the Guyana Elections Commission (GECOM) show that the performance of individual small parties contesting the General and Regional Elections is disappointing.

Based on votes already received for key regions, it is unlikely that any will secure the presidency and hardly likely will stand a chance at securing a seat in the National Assembly.
Small parties contesting the General Elections are: A New and United Guyana (ANUG); Change Guyana (CG); Liberty and Justice Party (LJP); People’s Republic Party (PRP); The Citizenship Initiative (TCI); The New Movement (TNM) and the United Republican Party (URP).

GENERAL ELECTIONS REVIEW
At Guyana Chronicle’s press time on Tuesday night, the votes of each party stood at: ANUG – 252; CG – 255; LJP – 195; PRP – 115; TCI – 78; TNM – 25 and URP – 52. These results were processed at 18:31hrs. The party in the lead is Change Guyana, led by businessman, Robert Badal. The party was launched in October 2019 plugging tax-free benefits for Guyanese and new business investments. Close behind is ANUG, led by former speaker of the National Assembly, Ralph Ramkarran. The party was launched in January 2019 and is big on constitutional reform.

On the heels of the two is the LJP headed by former Toshao, Lennx Shuman. The party was launched on January 12, 2019, projecting early on that it would be a strong advocate for Amerindian issues. The PRP follows next led by Christian leader, Phyllis Jordan. The party, launched in December 2019, promises to lift Guyana to higher moral standards and sharing strong views against abortion and homosexuality.

And way behind is TCI headed by educator, Rondha-Ann Lam. The party was launched on October 17, 2019 with promises of constitutional reform and campaign-financing laws.
The two lowest performers as of the above-mentioned time were newcomer TNM led by medical practitioner, Dr. Asha Kissoon and longtime contester, URP led by businessman, Dr. Vishnu Bandhu.

The TNM was launched in November 2019 labelling itself as a party of “young professionals,” while TNM hoped to end the ‘winner-take-all’ system by securing representation in the National Assembly. Working People’s Alliance (WPA) Executive Member, Dr. David Hinds, had told this newspaper in October 2019, that even though he is pleased to see more political groups join the fray, their emergence is ill-timed. “There are parties that arise out of the political and social situation in the country, and then there are parties that are formed around elections time, and I think a lot of the newer parties that you’re seeing now are parties that are formed around the election time, which means that they are formed just to contest the elections,” he reasoned.

“I think in the environment that we have now in Guyana, it’s very polarised, and I don’t think that voters in either of the two big ethnic blocs are about to experiment with a new party, because that’s what they will be doing if they vote for these small parties. It would be an experiment, and I don’t think voters are in the mood to experiment, because, you know, there is a lot at stake in these elections.”

He had put forward that his belief is that the only means for the recently-emerging parties to make a difference elections-wise was to “form partnerships with the bigger parties.
While several of the parties refused this option, LJP, ANUG and TMN entered into a joinder of lists which will see their votes being counted collectively during tabulation.

It is the first time that such an agreement was made in Guyana’s Elections and the parties signed an agreement which details that should they collectively win a seat, they will share their time in the National Assembly by 1/3 with the party with the largest contribution nominating the first member. As of the time aforementioned, the total votes for the General Elections for the three parties stood at 472.