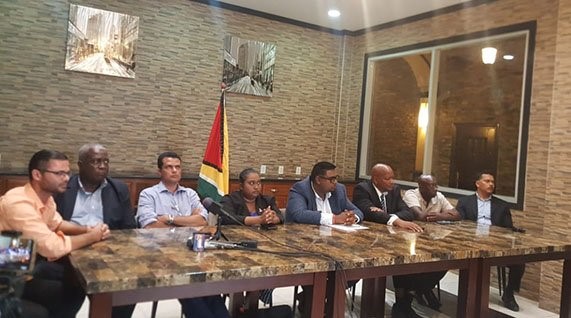 Six parties, including the opposition PPP/C, have rejected the unverified regional results released by the Guyana Elections Commission (GECOM) for Region Four and yesterday called for both the international community and the local citizenry to stand against any attempt by the incumbent APNU+AFC to re-claim government based on the announcement.

“We call on them [the international community] to do something a bit more strenuously than their watered down statement,” A New and United Guyana (ANUG) General Secretary Timothy Jonas told a joint news conference hosted last night by his party, the PPP/C, the Liberty and Justice Party, Change Guyana, The New Movement, and the United Republican Party.

“We are at a desperate strait…GECOM led by [Returning Officer Clairmont] Mingo and cohorts have hijacked the system… [There’s] no harm greater to a country than electoral fraud…we have to ask the international  community for help, the business community, citizens, the ordinary many… it’s time for a change,” he added.

Although the tabulation of the votes that had been underway since Tuesday was not completed, Mingo attempted to announce results for the region at the Regional Office at GECOM’s Command Centre, where he was drowned out by protesting party agents. It was not clear that a declaration was made. However, GECOM Public Relations Officer Yolanda Ward yesterday afternoon released without explanation images of Statutory Declaration Form 24, which showed APNU+AFC securing 136,335 votes, while the opposition PPP/C had earned 77,258, a difference of 59,077 and enough for the incumbent to cut into the opposition party’s total lead from the other regions and surpass it.

Up to press time this morning, there had been no public statement from GECOM Chairperson Claudette Singh or Chief Election Officer Keith Lowenfield on the decision to release the unverified results and international elections observer groups and foreign missions here have called the credibility of the announcement into question and urged that the lawful process for the counting of the votes be followed.

With the announcement, representatives of the parties except APNU+AFC claimed to be blindsided as they maintained that no official declaration had been made by Mingo and as a result they called for a recount of votes in the district.

The PPP/C called the released results “fraudulent,” with PPP General Secretary Bharrat Jagdeo declaring that over 22,000 votes were allocated to the APNU+AFC column based on his party’s count. “This is totally fake, a fraudulent declaration by 22,000 votes added out of nowhere, not verified, never voted for them, but they added 22,000 votes more to themselves,” Jagdeo told reporters earlier outside of the GECOM Command Centre.

“Now that the declaration has been made, we don’t have a choice but to do that, to make a request… we’re gonna request a recount in all the boxes. If we can’t get a declaration on the basis of which ones were altered because normally they would have to call it out and then say the numbers, we can then make an annotation on which ones we need to request the recount,” he said while adding that party representatives were in the command centre awaiting the verification.

PPP/C presidential candidate Irfaan Ali later told the joint press conference that he was appalled by the actions of Mingo and GECOM and related briefly what he had witnessed at the Command Centre. He informed that Mingo had earlier in the day said he was not feeling well, then left and returned to begin continuation of the tabulation of the Region Four results.

However, he said the process was abruptly halted around 2pm and Mingo then announced that he was going to declare the results. The PPP/C objected but this did not stop Mingo, who took to the internal stairs of the Command Centre and began calling out his results. His declaration was drowned out by loud shouts of no from PPP/C and other party agents. The party believed that the process had ended as Mingo left afterwards.

He called GECOM’s actions a move to “subvert democracy” and urged the body to correct the wrong as he said his party will accept a declaration if the Statements of Poll are verified, standard legal procedures are followed and the results announced, as per law.

At the press conference last night, Jonas said that he believes the “only leverage” that Guyana has is the international community. “There should be an approach that the government should not be recognised by the  international community and economic sanctions must be applied to individuals. There must be restriction on travel, funds held abroad must be frozen, the oil money to be put in an account that cannot be accessed… there are steps that can be taken to put pressure on the individuals,” he said.

Both Jagdeo and Ali pointed to the fact that an illegal declaration and the trampling of democracy had been witnessed by an international community of observers.

They agreed that the international community can put pressure on APNU+AFC to adhere to the law but added that the real pressure comes from this country’s citizenry and they hoped that all Guyanese would see the need to unite and call for the rule of law to be followed.

“If they comply with the law, there is no way that Granger can be sworn in. I have spoken with several groups from the international community and [have been told that] there will be no recognition of the government if Granger goes this route,” Jagdeo said.

“…We have to call on people to take a stand… every Guyanese should be mobilised and ready to fight for their rights, because where will this lead us?” he questioned.

Ali said that if Granger is sworn in based on yesterday’s announcement, “it’s hijacking an election and getting sworn in not based on the democratic will of the people.”

Change Guyana representative Nigel Hinds said the party believed that this country has been embarrassed by its leaders. “It is a seminal day in Guyana’s history and we hope we can find a way to thwart this destruction and degradation of our democracy,” Hinds said as he urged residents to “stand up” for their rights.

The New Movement’s presidential candidate Asha Kissoon said that she was surprised that the APNU+AFC did not want a recount if it was confident that it had won. She said to leave the party to claim victory would be “falling into a state of dictatorship”. She, too, appealed to supporters to pressure government to do what is right.

“If you know what is good for yourself and for country, you need to stand up for it,” she said.

The Liberty and Justice Party’s presidential candidate Lenox Shuman also challenged APNU+AFC to face a recount. “If you are so confident in your victory and you are confident in numbers presented to public, why not permit the process to run its course then at the end of the day we have results that can we stand on?” he asked.

The United Republican Party’s representative, Rawle Aaron, noted that his party had “no confidence in GECOM.”

He criticised the body for not being proactive and having backup staff and a shift system in place to relieve tired employees, who most times work for more than 48 hours without sleep. He said he was not surprised that several persons fell ill during the counting process. “We believe an organisation with a $7 billion budget would have contingency plan, especially with human resources. It is inconceivable that any Human Resource Manager would not put a shift system in place,” he said.