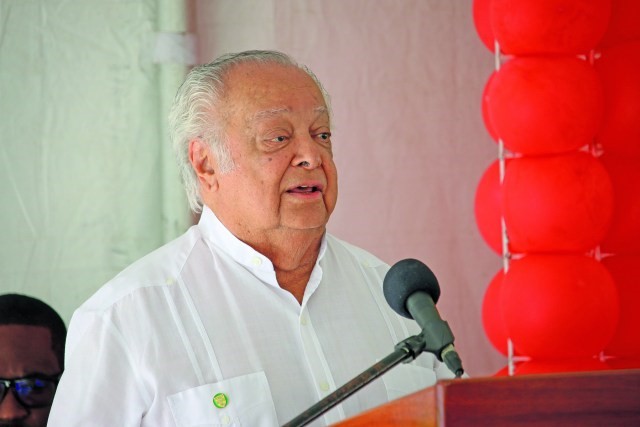 Guyanese Diplomat, Sir Shridath Ramphal, said it is regrettable that the CARICOM team that was here to oversee a recount of the March 2, votes has had to withdraw from the process.

The withdrawal came after a High Court injunction blocked the recount. At 17:30hrs on Tuesday, the team arrived at the Guyana Elections Commission (GECOM)’s High and Cowan Streets office, where they engaged the commission in a brief meeting. Coming out of the meeting, Commissioner Charles Corbin said: “They have formally indicated to us that, given the developments that have occurred, they are currently in discussion, and it is quite likely that they are going to withdraw tomorrow.” Commissioner Vincent Alexander added: “They have not given up on us; they have withdrawn at this point in time; they have indicated that they are still available if the need arises for an intervention to do so.”

CARICOM Chair, Prime Minister Mia Mottley of Barbados, on Saturday, had announced that President David Granger had made a request for CARICOM to field an independent high-level team to supervise a planned national recount of the ballots cast in the elections. This was agreed to by Opposition Leader, Bharrat Jagdeo, and the two local leaders signed an Aide Memoire for the agreed recount. However, CARICOM requested that this agreement be followed up with an Order and the same gazetted, but this was advised against by Guyana’s Chief Parliamentary Counsel, Charles Fung-a-Fat, as doing so would supersede electoral laws and infringe on the rights of electors. This was coupled with an interim injunction and Order granted by the High Court to halt the recount, on the basis that the declarations that have already been made were final, and that GECOM is the only agency authorised to conduct elections. This being the case, the high-level team withdrew themselves from the process. Though conceding that the way ahead is “not quite clear”, Commissioner Alexander said that the commission is expected to appear in court on Friday, March 20, 2020.

Meanwhile, Sir Shridath said in a statement that, “in the darkness of disagreement, CARICOM’s helpful intervention in trying to resolve the general elections process at the request of both president Granger and Opposition Leader, Bharrat Jagdeo, was a ray of light. All of Guyana should have welcomed it, as most Guyanese did. It is a wholly legitimate role of community that must not be smothered under any pretext whatever.”
He added: “It is utterly regrettable that, despite the highest-level agreement between the political leaders of Guyana and five CARICOM heads of government acting for the Community, the invited CARICOM team to oversee the recount of the votes, has had to withdraw. Guyana is being deprived of regional and international approval and the opportunity for global respect at a time when it matters most. CARICOM has not closed the door to proving the preciousness of its familial ties with Guyana; it can still play the role Guyana’s two political leaders agreed it should.

What is required now is for all to place the interest of the nation above other narrow considerations that could mar the country’s prospects; and retard the strides that the people of Guyana have made collectively. I urge that peace and progress be pursued lawfully and transparently.”