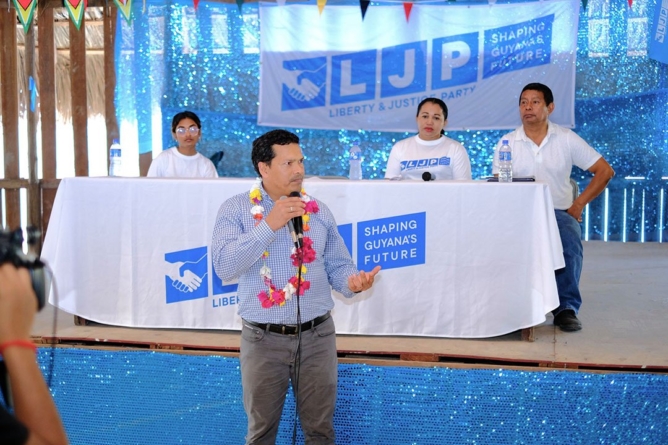 The Liberty and Justice Party (LJP) launched its campaign for the March 2 general and regional elections on Saturday with its leader and presidential candidate Lenox Shuman saying it is time that Indigenous people have a voice in decision-making as he argued that the two major parties, PPP/C and APNU+AFC, have consistently muzzled Indigenous voices.

At the launch at his hometown, Pakuri Village, Shuman outlined issues that the party will be campaigning on including ensuring that Guyanese do not starve and have proper housing, renegotiation of oil contracts, reducing deforestation and prohibiting river mining, fighting against corruption, and free healthcare and education, among others.

He argued that over half a century of governance, the two major parties have failed to significantly improve the lives of Guyanese.

The LJP will be hoping to win enough votes to secure seats to deny the winning party an absolute majority and use the swing seats obtained to ensure more accountability and better governance. In this regard, the LJP, A New and United Guyana (ANUG) and The New Movement (TNM), have agreed to join their Lists of Candidates for the upcoming polls. The move will see the parties contesting the polls separately but for the allocation of seats in the National Assembly and on the Regional Democratic Councils, the votes they secure will be counted collectively, improving their chances of securing parliamentary and regional seats.

“It is time for Indigenous peoples to have a voice,” Shuman said at Saturday’s campaign launch to dozens of supporters, which included John Flores, the LJP’s Vice-Chairman; Keisha Benedict, the head of the women’s league and Region Nine LJP candidate; and 18-year-old Jennifer Ramcharran, the head of the LJP youth group.

“It is time for indigenous people [to] have a voice. It is time that we address corruption. It is time that we shape the future of Guyana,” Shuman, who is of Indigenous descent, said. He declared that while he “may never be president of Guyana,” the formation of the LJP is to ensure Indigenous peoples and Guyanese youths have a voice in decision-making in the country especially as it relates to the issues that affect them.

He revealed that both the PPP/C and the APNU+AFC coalition tried to recruit him with the former approaching him in 2017 and the latter making a recent attempt. Shuman said he declined because both of those parties wanted to muzzle him the way they muzzled other Indigenous leaders in their respective parties. “Four of them [indigenous leaders] are ministers and three of them are on the opposition and yet they continue to do nothing for us. So what do you think my position would be if I joined their teams? My position will be worthless,” he said.

According to Shuman, the coalition is afraid of what the LJP represents which is why they tried so hard and extensively to recruit him and his party.

Shuman highlighted that if Indigenous peoples cannot sit at the decision-making table, then their suffering is going to continue.

Further, he emphasised that the LJP is not a party for only Indigenous peoples; rather it is a party for the entire country. He said the purpose of the LJP is to ensure that Guyanese constitutional rights are protected.

Once in power, he said, the party will ensure that Guyanese have free education and health care and the LJP has a comprehensive plan for that. The party is committed to shaping Guyana’s future and they intend to promote equal rights, regardless of disability, gender, ethnicity and sexuality.

Shuman said that they will also give communities full control of their land so the pace of development will increase. The party will also tackle unemployment.

All this, he said, can be accomplished with oil revenues.

However, the first thing that the LJP will do if they win the elections, Shuman said, is to ensure that the Guyanese population do not starve and have a place to go to if they don’t have a home of their own.

“After we get that part done, we are going to address constitutional reform and rights issues. We don’t intend on going about this in a mismatched manner and we have a very comprehensive approach and we already drafted out plans on how we intend on approaching governance,” he said.

Additionally, the LJP leader said, the party will also seek to renegotiate the oil contracts. “Contracts are only beneficial if both sides benefit … equally from it and [at] this point we don’t see that Guyana is benefitting or is an … equal beneficiary…and we would like to do renegotiations if we can,” he said.

As it relates to the environment, Shuman said that the party hopes to reduce the deforestation rate to zero and is considering plans for producing industrial hemp which will hopefully minimise the unnecessary cutting down of trees. The party is also against river mining.

“Where is the future that they promised you?  Are you living that future?” he questioned the crowd. “No!” was the response. “If they couldn’t keep their promise to your parents or grandparents, what makes you think that they are capable of delivering the future for your children or grandchildren,” he further asked.

Shuman pledged that the LJP will eradicate corruption. “They [the government] had to take our tax dollars to go and challenge the no-confidence motion. We, the taxpayers paid that bill and they are not accounting for it. All they want to do is take our money to go and find a way to stay in power and at the end of the day, they pay no attention to our suffering and issues that continue to plague society,” Shuman stated before adding that the money could have been used to improve conditions in neglected communities like Baramita.

“It is time that we put a stop to all of this. We are [not] paying taxes for people to misuse them or politicians to take it…The Constitution of Guyana talks about everyone having a right to free education and healthcare. So when [they] come into a community and build a school or provide a teacher, they’re not doing you a favour. Tax dollars paid for those. What [they] are doing is fulfilling [their] obligations in line with the Constitution and this is what we need to understand. When they build a school in our community, it’s not because they love us, it’s because the Constitution mandates that. Everyone is entitled to a safe neighbourhood, schools, safety and we are entitled to free education,” Shuman said.

Meanwhile, residents of the community are putting their faith in Shuman. “I serve under Lenox and I would have seen the potential that he has. What he brings to the table is the ideal stuff that Amerindians need. He is an individual with great vision. He will try his best and I know some people will have mixed reactions due to his time in office here but I believed that the reason why he didn’t accomplish all that he set out to do is because the resources is very limited in [the] community,” 31-year-old Timothy Andrews said.

Another resident, Deon Andrews, expressed similar sentiments and added that he fully supports the LJP.

When asked, another resident, Tyrell Abrahams, said that only 50 per cent of the community supports the LJP. He said that there is need for a third party in the country and he is certain that the LJP is that party. However, he said, the other half of the community’s population is divided by the two major parties. “I am here to support this party and Shuman is the one,” he said.