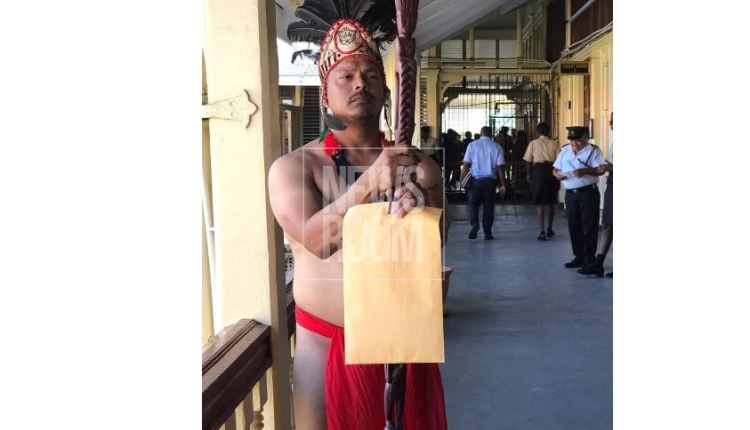 Presidential Candidate for the Liberty and Justice Party (LJP) Lenox Shuman was briefly prevented from entering the High Court on Tuesday after he turned up dressed in his traditional indigenous wear to listen to the arguments in an ongoing elections case.

Mr. Shuman said such a move made by Police Officers is seen as discrimination against indigenous peoples.

“I have a right as every other ethnicity in this country to enter into the court traditionally attired. People don’t stop others when they walk in here with a dhoti, they don’t stop you when you walk in with a traditional African wear or Chinese attire.

“Yet here we have an indigenous person dressed traditionally and I am being stopped. My constitutional rights are being violated,” he told the media on the corridors of the court.

Shortly after, the politician who previously served as the Vice-Chairman for the National Toshaos Council (NTC), was allowed to enter the chambers.

Shuman was at the court to listen to the hearings before Chief Justice Roxane George relating to whether the Region Four Returning Officer breached the country’s electoral laws when he Thursday last declared the unverified vote count for the country’s largest voting district.

He was questioned on whether his outfit which consists of a headdress, loincloth and wooden staff, can be termed as indecent exposure to which he responded in the negative.

A reporter pointed out that she can see his buttocks but Shuman said: “you can’t, you can see my cheeks, there’s a difference.”

He believes that the Police Officers should be educated about the various cultures and the rights included in the Constitution of Guyana.

The LJP Presidential Candidate pointed out that he is the only indigenous leader who contested the March 2 general and regional elections and should be given equal rights.

It is not the first time the Indigenous leader is wearing his traditional outfit as he has done so when attending the opening of the NTC conference and several other events.