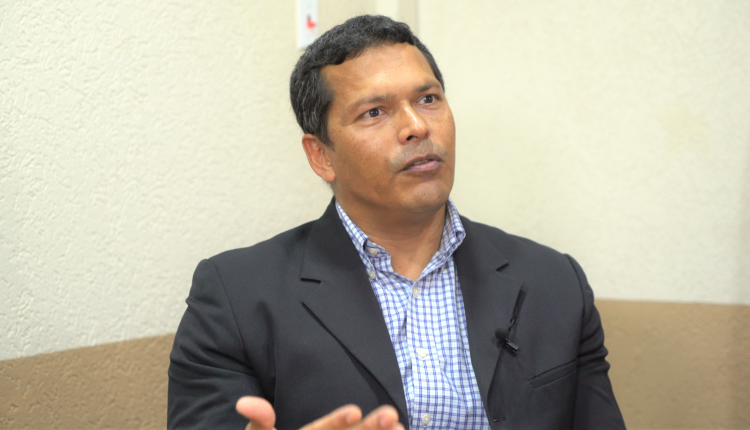 Leader of the Liberty and Justice Party (LJP) Lenox Shuman says his new post as Advisor to the Minister of Public Works on Civil Aviation will not conflict with responsibilities as an independent Member of Parliament.

“I’m being hired in a technical capacity, it is not in a political capacity and it is an evolution. There is nothing in politics that is stagnant…and we have to be able to change with it,” the former Indigenous leader said.

Shuman’s new job was announced at the weekend but his name was submitted to the Guyana Elections Commission (GECOM) weeks ago to serve in the National Assembly to represent the joinder list.

In an interview with the News Room, he said the agreement LJP signed with The New Movement (TNM) and A New and United Guyana (ANUG) will ensure that he represents all Guyanese and not just his employer in Parliament.

“If you look at the agreement…before we make decisions in the National Assembly, that has to be vetted and endorsed by all three parties so it’s not Lenox Shuman will walk in there like a lone ranger…to be able to disrupt or not disrupt. We signed an agreement and we intend on honouring that agreement,” he explained.

The LJP, TNM and ANUG formed a list joinder to contest the March 2, 2020 elections and together earned 5,214 votes to give them one seat in the National Assembly.

The LJP earned the majority of those votes followed by ANUG which is led by former Speaker of the National Assembly Ralph Ramkarran.

Ramkarran too was appointed as a Government Advisor raising questions about his independence.

Shuman, however, believes that coming from different backgrounds and beliefs, the three parties together can be able to do what is needed to serve its voters.

He told the News Room in his new post will allow him to fulfil parts of the LJP’s constitution which were formulated to contest the 2020 elections.

The former Indigenous Leader said the issue was also discussed with his party members where it was “agreed that we are going to work to fulfil our manifesto however we can get this done.”

Shuman has been a pilot since 1999 and says his knowledge and experience in this field will be used to ensure Guyana becomes the gateway to South America and also help the indigenous population since the majority of the hinterland villages are accessible by planes.

“We’ve not been able to grow the tourism industry, we don’t have direct access to Europe, six of the ten regions have indigenous people that require aviation to access them so it is a tremendous amount of work to be done and I think it gives me and our membership an opportunity to fulfill part of our manifesto,” he noted.

Shuman is the holder of Canadian and US Airline Transport Pilot License with Single and Multi-Engine Land and Sea Aircraft ratings.