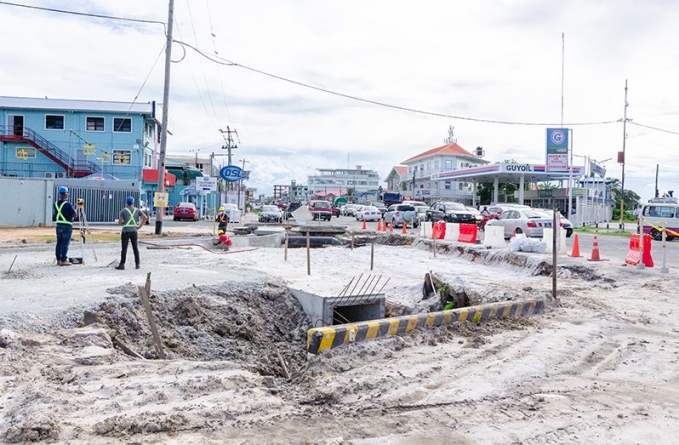 THE recently recommenced Sheriff/Mandela Road Expansion Project is moving rapidly apace with some 53 per cent of the overall works completed thus far. This was confirmed by Minister of Public Works, Bishop Juan Edghill, during a recent interview with the Guyana Chronicle on Tuesday.

“A significant amount of work has already been completed, but it is behind schedule,” Minister Edghill noted. In December 2017, the then Ministry of Public Infrastructure signed a contract with Sinohydro Corporation Limited for the rehabilitation of the seven kilometer stretch of road between Sheriff Street and Mandela Avenue. The Inter-Development Bank (IDB)-funded project was estimated to cost USD$31,027,627.36. It was initially scheduled to commence in March 2017 and completed within a 24-month period. Construction, however, began in August of that year. Fast forward to 2020, very little work had been done.

“You would recall that when we took office, there was nothing that was happening, but I met with the contractors and the consultants and works are moving ahead,” Minister Edghill noted.
As it is, there are seven sub-contractors on site, all working simultaneously on various aspects of the project, in an effort to complete it, since it passed the August 4, 2020 deadline.

“We are doing so much to the extent that it is even a humbug to traffic,” Minister Edghill noted.
Like many infrastructure projects in recent times, the Sheriff/Mandela Road Expansion too suffered a suspension after the IDB halted funding in November 2019. This particular hiccup was as a result of health and safety violations by the contractor, Sinohydro Corporation.

Following the protracted March 2020 General and Regional Elections, the IDB was re-engaged by the new Irfaan Ali Government, addressing a number of concerns, especially those pertaining to the environment. Once completed, the Sheriff/Mandela project is expected to benefit from improved road safety infrastructure; better coordinated traffic movements; as well as adequate drainage along the road corridor and its surrounding communities.

The project, according to its outline, is also expected to extend the design life of the Sheriff/Mandela pavement and its interconnecting structures by at least 20 years. The project will boast of a two-lane roadway with a concrete median to divide the two lanes along Sheriff Street. Meanwhile, Mandela Avenue will see the expansion of the roadway from a two-lane road to a spanking four-lane thoroughfare, with a central concrete median and shared-use paths.

A roundabout is also set for the junction of Sheriff Street and David Street/Railway Embankment Road.
“The roundabout is starting up. So far, we’ve completed one of the bridges, and the other one will commence soon,” the Public Works Minister noted. The Sheriff/Mandela Project, according to its work plan, will be outfitted with the requisite road safety amenities such sidewalks, bicycle lanes and adequate parking spaces. A pedestrian overpass is also on the cards for the vicinity of the East Ruimveldt and North Ruimveldt secondary schools.