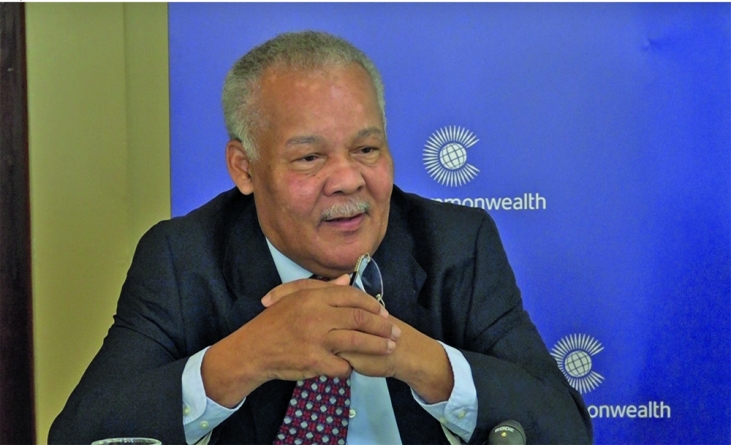 In light of the ongoing electoral fiasco, another international observer mission – The Commonwealth Observer Group, has withdrawn from Guyana, citing serious and persistent electoral malpractice following the March 2 polling day and the failure of the Guyana Elections Commission (GECOM) to stop the blatant disregard for the rule of law and electoral ethics.

The Observer Group, which was headed by former Barbados Prime Minister Owen Arthur, withdrew from Guyana on Sunday, March 15.

In a statement on Tuesday, the Commonwealth Mission contended that the tabulation processes conducted by the Region Four (Demerara-Mahaica) Returning Officer (RO), Clairmont Mingo, were not credible, transparent and inclusive.

In fact, the Mission noted that the series of events that it observed in the tabulation of Region Four results between March 3 and March 14 were of grave concern. Among the issues highlighted by the Group include the repeated cessation of the tabulation process for a variety of irregular reasons and the unlawful declaration made by Mingo on March 5, despite the tabulation process being halted.

According to the Commonwealth Group, it did not observe any material or substantive impediments inside the tabulation room, which might have prevented the resumption of the tabulation process.

“It is the Group’s clear view that robust exchanges between political party agents in the room only occurred when the Guyana Elections Commission repeatedly halted the tabulation process… The unlawful 5 March declaration of Mr Mingo was undertaken under heavy Police guard; and his departure from the tabulation centre was guided and guarded by six Police Officers,” the missive from the international group stated.

It further outlined the continued failure of the RO to comply with the March 11 and 13 orders and judgements of the acting Chief Justice, Roxane George.

The Group noted that the Chief Justice made it patently clear on March 13 that actual Statements of Poll should be shown to entitled parties present, adding that for the avoidance of doubt, she even demonstrated herself how this should be done and enquired “what was the difficulty in doing so” during the contempt of court proceedings.

“However, on resuming the tabulation after leaving the court on 13 March, Mr Mingo refused all requests from those entitled to be present to view the actual Statements of Poll and did not display the spreadsheet being populated. This compromised the process of ascertaining the credibility of the Statements of Poll relied on by Mr Mingo to tabulate the results; and, it was impossible for party agents and those entitled to be present to observe that the numbers being called out were being accurately entered on the spreadsheet,” the observer group stated.

In fact, it went on to say that in multiple instances, the number of votes announced by the RO during Friday’s tabulation differed from those which had previously been agreed by all parties present during the first March 4 tabulation process. In some cases, it added, this resulted in tabulation totals reflecting more voters than were entered on the list of eligible electors for certain polling stations.

“At no point did the leadership of the Guyana Electoral Commission halt or rectify these blatant instances of disregard for the rule of law and electoral ethics, despite its vested authority to independently ensure credible elections,” the international observer stressed. The Commonwealth Group further posited that despite the serious and persistent electoral malpractice observed by the Group from March 3 to march 14, the Group welcomed the Caribbean Community (Caricom) initiative, at the invitation of President David Granger, to deploy a High-Level Team to Guyana to supervise a recount of the ballots. However, the Group expressed regret that the Team has now departed Guyana having been unable to complete their task.

Nevertheless, the Commonwealth Observer Group commended Guyanese for peacefully exercising their right to vote for the Government of their choice on March 2, adding that this is a sacred constitutional and universal right which will be respected when every Guyanese vote is transparently and credibly counted.

The Group, which was deployed by the Commonwealth Secretary General, Baroness Patricia Scotland, will be submitting its full report to the Baroness, who will then forward it to the Government of Guyana, the Chairperson of GECOM, leaders of political parties, and to all other 53 Commonwealth Governments.

In its preliminary report on March 4, the Observer Mission flagged GECOM over, among other things, its finalisation of Polling Stations and the signing of the Code of Conduct by political parties mere days before Election Day.
The Group also highlighted the “urgent need” for constitutional and electoral reforms, specifically comprehensive reforms in the voter registration system, including legislative reform.

The Commonwealth Mission’s withdrawal comes on the heels of the Organisation of the American States (OAS) pulling its Electoral Observation Mission (EOM) last week, saying that it had no option than to withdraw from Guyana, since the ascertainment methodology that was used did not meet the required standard of fairness and transparency.