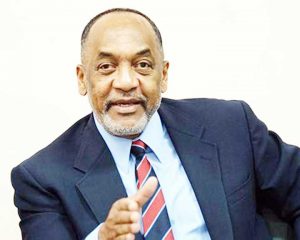 Since the Irfaan Ali administration took the decision to send Head of the Environmental Protection Agency (EPA) on leave last week, several individuals have expressed frustrations over his removal at this critical time, as the government reviews Exxon’s third intended development in the Stabroek Block, the Payara project.

Concerns revolve around the fact that Dr. Adams sought to bring Exxon’s operations in line where a series of its environmental infractions are concerned
Eight civil society professionals in the diaspora, including regular letter writer Darshanand Khusial wrote a joint note describing the frustrations best. They stated “A patient with cancer would want an experienced world-class oncologist to give the diagnosis and prescribe the treatment. For a life-changing event, one wouldn’t fire the oncologist in the middle of their assessment and then seek advice from a replacement with much less qualifications and experience. But it appears the Government of Guyana has done just that in forcing EPA Head Dr. Vincent Adams to take his vacation at a critical period in the assessment of the Stabroek Block oil operations.”

Dr. Adams has championed several environmental issues plaguing ExxonMobil’s operations at the Liza Destiny Floating Production, Storage and Offloading (FPSO) vessel, and has noted that he had actively been rewriting permits to ensure they are sufficient to ensure Guyana’s natural environment is safeguarded.

These issues include ExxonMobil’s refusal to pay paltry fines for small hydraulic fluid spills, flaring of billions of cubic feet of natural gas, and dumping of thousands of gallons of reservoir water into the oceans.
Up until the government’s decision to send him on leave, Adams held up the approval of the Payara permit because he wanted to ensure that ExxonMobil conducted its due diligence to protect Guyana’s environment, lest it be allowed to proliferate such hazards in more projects.

Despite ExxonMobil’s threats that it would take its money elsewhere, “Dr. Adams has stood his ground and was not intimidated by the oil companies,” the civil society professionals stated.
“We need strong leadership like that demonstrated by Dr. Adams to protect Guyana from being exploited by the oil companies in their pursuit of shareholder profits,” they stated. “Dr. Adams has 30 years of experience in the US Department of Energy with key leadership roles ranging from nuclear to environmental. He earned his PhD from University of Tennessee. If we reject our best, how can we escape the resource curse?”

The Transparency Institute Guyana Inc. also recently wrote asking the Government to explain why Adams was being sent on leave.
“We see no reason for removing our best qualified person for reasons other than misbehaviour,” TIGI’s Director, Alfred Bhulai stated, “especially when ExxonMobil wants to release reservoir water into the ocean instead of injecting it into the wells.”

He noted that Dr. Adams has sharply opposed the continued occurrence of these environmental hazards, and posited TIGI’s view that it is for Adams to decide on the approval of the Payara permit that if anyone else is handed the decision to make, it would not have confidence in the agency.

One letter writer, Mike McCormack, head of the Guyana Human Rights Association, noted the demoralizing impact of the Government’s decision on many Guyanese who have been impressed with Adams’ leadership of the EPA, and his drive to protect the environment

“Recruitment of the best professional services of qualified Guyanese requires they be protected from the absurd assumption that they are ready to abandon years of professionalism to partisan politics.” McCormack stated, adding that whether Adams is still an executive of the Alliance for Change (AFC) should have no impact on how he is expected to perform at the helm of the EPA.

Leader of the Alliance for Change (AFC), Khemraj Ramjattan had expressed disappointment last week, calling Adams’ removal a “most egregious development”. He had called on journalists, politicians and civil society to condemn and mobilise politically against the development.

McCormack said that while there is room for improvement at the EPA under Dr. Adams, the understanding is that this is due to inadequate resources and staff, rather than his own performance.
He concluded that unless convincing evidence is provided that Adams is exhibiting less than professional behaviour, it could only be assumed that it is his professionalism that the administration takes issue with.