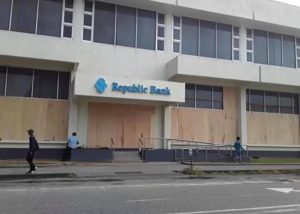 Schools around the city have remained closed and businesses have ramped up security as political tensions rise across the country.

Several city schools were closed due to a low turnout from the student population for the week.
Teachers at various schools along Woolford Avenue told Kaieteur News yesterday that the numbers began to decline since Tuesday—the day after the Regional and General elections.
A teacher attached to North Georgetown Secondary School said that fewer students started showing up for school as days went by.
The teacher told Kaieteur News that Woolford Avenue –a primary (school district) in the city had become “a dead zone”.
Teachers attached to St. Joseph High School gave a similar report. For the week, the school population of 650 students had diminished to fewer than 200.
“On Tuesday, we had about 150 students but the numbers kept declining. We had about 45 students on the register by Wednesday and today none of the students came out. You can see that all the 22 classrooms are empty.”

Similarly, at neighbouring Stella Maris Primary School, teachers said that the register of pupils have been declining rapidly since Tuesday.
The school which has a pupil population of over 700 has seen an attendance of approximately 500 since Tuesday.
“On Tuesday, some students came but they went home at midday. We realised that students that live on the East Coast and East Bank have stopped coming altogether.

“So, we just are doing revision work to keep them occupied, no new topics are being taught right now because it would put those who are not here at a disadvantage.”
Meanwhile, several businesses located in the various wards of the city remained closed. Stores, banks and shops along busy commercial districts like Regent Street had put up shutters.
In some cases, businesses like Republic Bank erected plywood shutters around the buildings. Store owners told Kaieteur News that those measures were put in place to safeguard the property in case of a post-election violence.