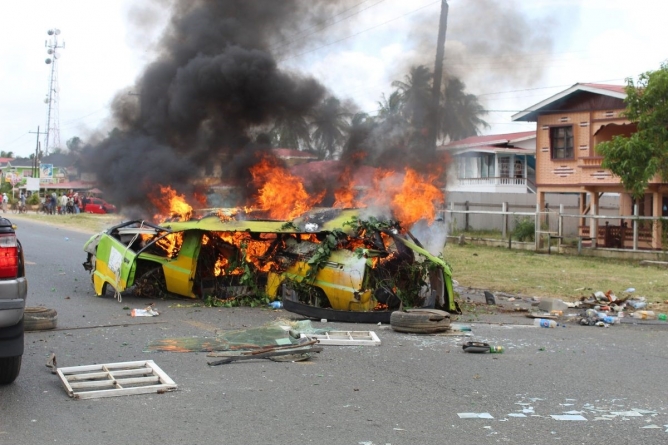 Scenes of violence unfolded and a bus transporting schoolchildren was attacked, police were stoned and chased, motorists were harassed and roads were blocked and set afire as rioters, protesting what they claimed were “rigged” elections, rampaged at several locations in Berbice yesterday.

The protest at Bath, West Coast Berbice, Region Five – one of several across the coast – quickly erupted into violence as People’s Progressive Party (PPP) supporters took to the streets calling for Region Four votes to be recounted and a winner of Monday’s general and regional elections declared.

Though the Guyana Elections Commission (GECOM) is yet to officially declare the winner of Monday’s polls, echoing statements by PPP leaders, the protesters claimed that the elections have been “rigged.”

In Region Five, four schoolchildren sustained cuts to their heads after the ‘David G’ school bus they were returning home in was hit with glass bottles, shattering the rear windscreen. The school bus was named after President David Granger, who initiated a programme to transport children to school. The four children have all received medical treatment and were sent home with their parents yesterday afternoon.

In Bath Settlement, the protest began in the morning and the residents first started to placed wood and scrap metal across the public road as they shouted “Granger must go.” Kamila Persaud, who was seen sitting on a truck tire in the middle of the public road, said, “We are here since morning and we plan to stay here because Granger is playing a bully.”

Another protester, Raymond (only name), said, “Granger should have declared himself president for life and let we understand that. Simple.” Sandra, another protester, said, “Guyanese not stupid. Region Four results took too long to come out and that alone show that they can rig. Why they took out those people from GECOM office last night?” she questioned. “President Granger want to swear in secretly. Why we even vote?” she said, adding, “We will stay here till we have our satisfaction. We had enough for five years.”

The riot police subsequently arrived on the scene but this further agitated the protesters, who began hurling expletives and racist slurs at them. The protesters then started to run along the public road, pulling old cars and buses, other scrap metal, wood, tires, trees and plants from the parapet, and starting fires in the middle of various parts of the road, as they continued to pelt at everyone who was passing.

At one point, they even seized two guard huts from businesses along the public road, along with garbage bins, which they set alight along the road.

The protest ran from Bush Lot Village to Cotton Tree Village, West Coast Berbice, a distance of over 16 kilometres.

While the riot police were blocking protestors at Bush Lot Village and Bath Settlement, other protesters started to form small groups along the Region Five main road, screaming for a recount of Region Four votes, while also using items to start fires along the road. “We want a recount. We punish for five years and now them trying to rig fa stay in,” one older woman said. The woman, who was sitting on the bottom of a utility pole, said despite her age, she will continue to support the protest.

According to a protester, supporters of the APNU+AFC gathered along the Hopetown public road on Thursday evening celebrating the supposed victory of the coalition, which led them to protest yesterday. “Them start hit up people car when them pass and chase people out. People get frighten,” the protester alleged.

Yesterday, the police sustained the brunt of the rioters’ ire as they had glass bottles, metal and wood hurled at them throughout the day at various places on the West Coast of Berbice. The protesters continuously cussed and threatened the police, and various groups of rioters tried to attack several ranks throughout the day. At one point, a group of several police ranks quickly fled as the yelling rioters chased them, hurling various missiles at the law enforcement officers.

Protesters, who began imbibing alcohol, also threw squibs at the riot police who were blocking them from leaving the cross streets.

As four media operatives attempted to render assistance to the two ranks, the protesters rushed up to the vehicle with broken bottles in their hands. However, the car quickly sped off as the policemen entered. The ranks were visibly scared, confused and shaken up after the ordeal.

Meanwhile, several reporters barely escaped the wrath of the rioters as they refused to allow any vehicle to pass through blockages on the public road.

At Hopetown, residents armed themselves with cutlasses and other items and ventured over to the Bush Lot Secondary School to collect their children and return them home safely. 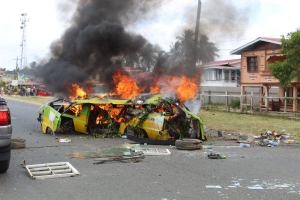 Subsequently, some of those persons arrived at the protest location and were involved in altercations with some protesters.

Up to late yesterday afternoon, the protests were still ongoing in Region Five, and protesters told Stabroek News that they would be on the road throughout the night, hoping to outwait the police ranks present.

Police Commander Yonette Stephens at 5 pm said there were reports of ranks being injured but she could not give any other information as she was still on the ground working.

In Region Six, there was a peaceful protest in Canje, which saw residents standing on the two sides of the Rose Hall, Canje public road, calling for a recount of the Region Four votes.

“I am out here because my democracy has been trampled upon. PPP did not lose the elections and APNU/AFC is daylight robbers,” Sherry Bipat said.

At Tain Settlement, Corentyne, the protest escalated gradually throughout the afternoon, as protesters from Black Bush Polder were brought to join the Tain protest.

Shortly after 3pm, one police officer was pelted with a bottle while another fainted. Commander Calvin Brutus confirmed that both were transported to the hospital for medical assistance, and said that there had been no arrest at that time.

Protesters were also thrashed with batons after the rank was pelted from the vehicle.

One protester at Tain said, “We win the elections and we a protest here how long the results na [done] properly.”

At a protest at midday in Black Bush Polder, protestors used old machinery to block the road, while at the Number 19 Corentyne road, protestors lit several items afire in hopes of halting the flow of traffic.

As the protests began in Region Five yesterday, businesses shut their doors. As of 1pm in Region Six, most major business had shuttered, especially those in Rose Hall Town.

As of last evening, protests were continuing at Tain and Number 19 Village, Corentyne, with fires across the public road, while Stabroek News was told that other villages would be resuming their protests.