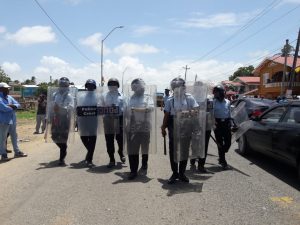 Pandemonium broke loose yesterday on the East Coast Demerara Public road at Lusignan and Mon Repos after officers in riot gear were forced to retaliate against violent supporters of the Opposition People’s Progressive Party Civic (PPP/C).

The exercise started as a massive protest that quickly deteriorated into an unruly riot.
Police were forced to block the road from Mon Repos in the west, and divert traffic to the Railway Embankment which remained the only thoroughfare for traffic to flow in and out of the city.
When Kaieteur News arrived at the protest, the protest had not deteriorated. Instead, hundreds of supporters lined the streets, many dressed in black and white but the mass clothed in red, held placards and screamed “Save our Democracy! Count our Votes!”

Slogans on many other placards ranged from “We don’t want any dictatorship in our country, Guyana” to “Democracy must prevail” and “We need a recount!”
One protestor said, “We deserve our democratic right; we deserve it and we must get it!”
The protestors used a Guyana Power and Light pole to block the main road. Three elderly women planted themselves firmly, screaming to the cameras, “Granger must go!”

Further up, another pole was set alight. The supporters screamed that they were peaceful.
Democracy was the underlying drive for the assembly of the PPP supporters. Following the controversial Region Four results announcement, the supporters felt that their democratic right was trampled upon and decided to let their voices be heard.

Opposition member, Anil Nandlall later arrived at the protest scene to address the massive crowd. According to him, the people had a right to be out protesting but they were trying their best to get the crowd under control and off the public road.

According to him, “The tension here is unhealthy and can develop into a dangerous situation.”
He told the crowd “Guyanese, freedom loving Guyana, democratic-minded Guyanese are all offended right across this land.”

“But we also cannot contribute to a situation…I am asking you to remain calm, remove from the roadway please, let us build together.”
But this proved a difficult task as the supporters screamed back at Nandlall, standing firm in their position that they will not remove and unblock the road until the Guyana Elections Commission begins the recount of Region Four votes.

“We are not moving! We deserve our democratic right! Region Four votes must recount! It is not a party protest!”
“Remain calm” was the cry by Nandlall but this fell on deaf ears, resulting in riot police being mobilised, sent to the area and a dangerous situation developed.

Protestors at the sight of the riot police became rowdy and advanced, forcing the police to dispel tear gas and fire rubber pellets into the large crowd.
Seven persons were shot about their bodies.

One man sustained a pellet wound to the head while another got shot to his legs and abdomen. They were rushed to the Georgetown Public Hospital and treated for their injuries.
On the West Coast

While police focused their attention on the East Coast, the West side protestors gathered in their numbers. From Windsor Forest, residents emerged with flags and assembled at the roadway, with placards in hand.
They were deemed peaceful and dispersed on their own accord. Protestors also assembled at Zeelugt, East Bank Essequibo, but they too, later dispersed on their own. 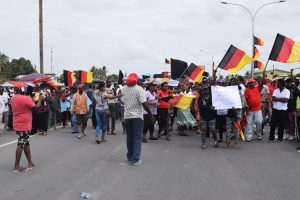 But, according to police reports, areas including Canal No.2, Cornelia Ida, and Belle West were chaotic. Tyres were set alight to block the roadway, preventing the easy flow of traffic.
Kaieteur News made contact with the Regional Commander Superintendent Simon McBean who relayed that the situation was under control.

According to him, the protests started at the Claybrick Road, Canal Number Two just before noon, with protesters burning tyres on the roadway.
The police managed to disperse the crowd, which boarded vehicles and headed to the Demerara Harbour Bridge.

“However, we managed to intercept the crowd at Bagotsville, with roadblocks, and the turned back,” McBean said.
Commander McBean said that there were no arrests and none needed thus far.
The police have set up roadblocks at the Demerara Harbour Bridge and other roadblocks at critical areas.

Persons are urged to remain calm during this period.