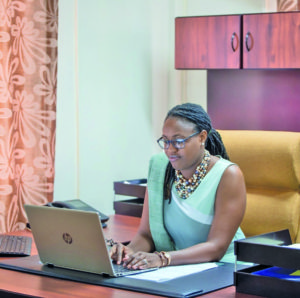 FORMER Public Service Minister Tabitha Sarabo-Halley, who resigned from the Working People’s Alliance (WPA), will be taking up the seat that has already been allocated to her in Parliament as an “independent”, multiple sources have confirmed.

The former Chairperson of the WPA resigned after the Party pulled out of the A Partnership for National Unity (APNU).
Although submitting Sarabo-Halley’s name among its four nominees for Parliament, the WPA wanted to have the final say on who should be heading into the National Assembly to take up the parliamentary seat.

However, PNC/R Leader, David Granger reportedly selected Sarabo-Halley for the post.
Meanwhile, on Thursday, WPA Executive member Dr. David Hinds, via a press release in response to queries about the Party’s withdrawal from the APNU, noted that the Coalition is not a political party with a single leader.

He said it is a party of independent and autonomous parties with their own leaderships, and their separate ideological positions.
Dr. Hinds said that the WPA’s withdrawal was a difficult decision that was taken after much deliberation.
“We wish to assure the public, especially supporters of the Coalition, that it is a principled decision that was not born of expediency, because there appears to be some confusion over WPA’s representation in the National Assembly,” Dr. Hinds noted.
First, he said that the Party’s principled position is that the WPA should have the final say on who represents it in the National Assembly and the Regional Democratic Councils.

He explained that while the party recognises that the Representative of the List has overall supervision of the process, the practice within coalitions is that the autonomous parties name their representatives.

This practice, Dr. Hinds said, is followed within the wider APNU+AFC Coalition, whereby the AFC names its own representatives, but APNU leader, David Granger has stoutly refused to replicate it within the Coalition.

“We reiterate that the APNU is not a political party with a single leader; it is a coalition of independent and autonomous parties with their own leaderships and their separate ideological positions. Thus, each party knows best the kind of representation it requires. No party should determine that for the other,” Dr. Hinds said.

The WPA Executive continued: “The WPA shortlisted four of its candidates, with the expectation that it would be allotted two seats. We agreed that one seat would be rotated between Brother Ali Majeed and Sister Tabitha Sarabo, with Brother Majeed serving for the first half of term, while the other seat would be rotated between Brothers Kidackie Amsterdam and Deon Abrams. WPA felt that these choices represent a mix of ethnic, gender and generational diversity. We also felt that the rotation device would allow more members to gain parliamentary experience. These decisions were unanimously agreed to.”
Further, Dr. Hinds said the WPA received the resignation of Sister Tabitha Sarabo from the party, but regrets her departure.