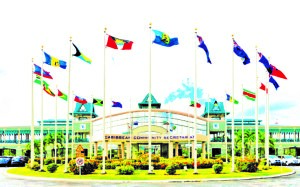 With persons aligned to the coalition crying foul over the close attention the Caribbean Community (Caricom) is paying to Guyana’s elections, former Attorney General Anil Nandlall has made it clear that Caricom has a vested interest in what happens in Guyana.

He made this observation during a Canadian radio talk show, Chit Chat with Narine Dat Sookram, which is broadcast on Canadian 102.7 CKMS FM and on Rogers Cable TV 946.
Nandlall said that if one nation in Caricom went rouge and is faced with sanctions, the whole of Caricom could feel the effects. Caricom, therefore, he said, has an interest in keeping Guyana in the democratic fold.

“Whatever happens in Guyana will impact the entire Caricom. And I was fortunate to have attended a meeting with five Heads of Government in the Caribbean, and President Granger and Mr Jagdeo, at the Caricom Secretariat, during this same period, just after Mingo’s fraudulent tabulation.”
“And the Caricom leaders made it very clear that Caricom and the Caribbean people have a horse in this race. Let them for not one moment think, this is a PNC and a PPP matter. And it’s not a matter only for Guyana.”

He warned that the effects of sanctions can include banks being restricted from providing service to the Caribbean people. This, he said, will suffer “severe detriment if one of its member states becomes a black sheep internationally and sanctions are imposed. Sanctions are interrelated. If the banks pull out of Guyana, it affects every bank in the Caribbean. Because these are regional establishments.”
“We need continuous support from the local observer teams, the local diplomatic community, the international community, the international organisations, sister countries, Governments. The truth of the matter is, the world is one small global village.”

Damage
Moreover, Nandlall noted that the damage caretaker President David Granger and his coalition has dealt Guyana, is immeasurable. He noted that rigging and the threat of sanctions and unrest would chase away any investor, much less tourist.

“The damage done to Guyana’s international reputation (is immeasurable). Before these elections, Guyana made the front page of Time magazine, the Newsweek magazine, the economist magazine, as the next Dubai. Go and google Guyana now. Guyana is the place where democracy is being stolen. Where a Government is refusing to give up power.”
“Where dictatorship is creeping in. Where authoritarianism is deep-seated. Guyana is a country on the verge of social unrest. You google (rigging President) and Granger photo shows up… people think that I’m joking. That is where we are now.

The matter is not helped by the sorry state of Guyana’s finances and traditional sectors, in particular sugar, which Nandlall alluded to. In fact, Nandlall noted that when the PPP takes over power as the next Government, it will be an uphill task repairing the damage caused by APNU/AFC’s macro-economic management.

“Firstly, we have our manifesto of deliverables. Then we have to assess the damage these people have done and repair that damage. We don’t know what is the extent… we don’t know how many loans we are inheriting. We left a buoyant and vibrant economy. It was compared as one of the best in the region.”

“We had a healthy foreign and external reserve. We had good balances in the central bank. We had a stable interest rate, that was declining. We had a stable dollar. High but stable. We left billions of dollars in the treasury and extra-budgetary accounts. In fact, they use to criticise us, that we are hoarding and hiding this money, when the law says they must be kept away from the consolidated fund.”

With APNU/AFC’s time in office waning after the General and Regional Elections showed the PPP/C winning by 15,416 votes, Guyana is in uncharted financial waters. Not only has the country’s general reserves been depleted to $0, but the account is also now running an overdraft to the tune of hundreds of billions of dollars.

This situation was illustrated in the Bank of Guyana’s statement of Assets and Liabilities, published in the May 23 Official Gazette, revealing that the General Reserve is -$290,667,332. Additionally, Public Deposits have also depleted to below $0, also recording a negative balance of -$88,629,401,855.
Guyana’s Contingency Reserve account also reflects an alarmingly low amount of $2.3 billion. When APNU/AFC took office in May 2015, Guyana’s General Reserve had in its coffers just about $6 billion while the Contingency Reserve held $4 billion.

While oil revenues are expected to drastically boost Guyana’s revenue, the onset of COVID-19 has led to a drop in demand for oil and consequentially, a drop in prices. ExxonMobil, which is producing oil offshore Guyana, was also forced to announce cutbacks to its global work plans back in April.