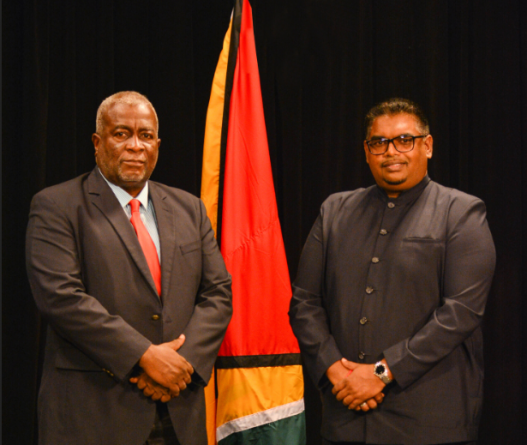 Presidential Candidate for the People’s Progressive Party/Civic (PPP/C), Dr Irfaan Ali, whose party won the March 2, 2020 General and Regional Elections, has noted that Guyana will be crippled if the foreign powers are to impose sanctions, as a result of the A Partnership For National Unity/Alliance For Change (APNU/AFC) attempts to thwart democracy, but noted that it will be a necessary factor to bring the oppressors to their knees.

Foreign Governments, inclusive of the United States, Britain, Canada and the European Union have warned that Guyana would be ostracising itself if a new Government is formed on the basis of the concocted figures of Returning Officer for Electoral District Four (Demerara-Mahaica), Clairmont Mingo. In essence, the superpowers are warning of sanctions if the APNU/AFC and its rigging cabal succeed.

The very threats of sanctions worry the PPP/C since it is of the belief that the country would be crippled and has since been fighting to ensure that the will of Guyanese who voted at the March 2 General and Regional Elections are not derailed. The figures emanating from the National Recount of the ballots prove that the PPP/C won the majority by over 15,000 votes.

In an interview on Monday, at Television Guyana (TV-G), Channel 28 studio, Dr Ali said that the mere threat of sanctions has the ability to reduce the credibility of the country. He explained that investors will question the stability before deciding to invest, also, both regional and international financial institutions would also consider those threats before venturing into Guyana and respond to the needs of the country.

“You are looked at in a totally different light just by the threat of sanctions and especially when that threat is one relating to the rule of law, democracy and good governance. That is the hallmark of every nation. That is the core of every nation and when these are the things that are threatened giving rise to the threat of sanctions then your country is viewed as totally differently,” he noted.

Dr Ali furthered that this is an especially important time in Guyana’s economic development with it in the early stages of being an oil-producing nation and dealing with the global coronavirus pandemic that has the potential to cause tremendous damage to both the financial and economic systems. He related that it is time for the rule of law and good governance to prevail since Guyana should be mobilising the support of international financial institutions and not be at an election impasse.

The former Housing and Water Minister explained that every aspect of livelihood would be affected should the superpowers decide to dish out sanctions on individuals complicit in committing electoral fraud. He explained that those sanctions would be more than just travelling restrictions rather they.

“Financial flows will not come from the international organisations, our revenue there to bring from the oil and gas sector would be frozen, foreign investment will dry up. These are the types of things that will cripple our country and unfortunately, if this cabal continues in the way they are going then collectively as a nation, though the implications are grave, we would have to understand that sanctions would have to be those who are oppressing our country to bring the oppressors of democracy, good governance, and the rule of law to their knees and make them answerable so that our country can return on a democratic pathway,” Dr Ali related.

Not the 70s and 80s
Meanwhile, PPP/C Prime Ministerial Candidate, Brigadier Retired Mark Phillips noted that the current political situation in Guyana could be best described as unstable. He noted that when political instability exists then every aspect of development will be affected.

“From a security standpoint, it (sanctions) will affect a lot of security cooperation agreements and defence-related agreements that we have with neighbouring countries and organisations. The capacity-building programmes of our Police Force and Defence Force depends on those relations…when democracy is threatened many of those security arrangements will have to be placed on hold until we get our house in order and that is the reality,” the former Army Chief explained.

As international pressure continues to mount on the incumbent APNU/AFC coalition to concede following its defeat at the March 2 General and Regional Elections, Phillips has made it clear that the coalition will not be allowed to get away with electoral fraud as the world will not stand idly by and allow an illegal Government to be foisted on the nation.
According to Phillips during an interview broadcast on Antiguan radio NICE FM 104.3 Online, this is not the 1970s and 80s where the entire world turned a blind eye to what was happening in Guyana.

“You hear terms like ‘non-interference’, those were applicable in the 1970s – the important term today is the responsibility to protect [democracy] and the international community is telling us that you’re part of the Civil Society Charter of Caricom, and similar Charters in the OAS and the Commonwealth of Nations, and we have to respect the will of the people in Guyana. We have to respect the rule of law in Guyana,” he said.

During the 1960s, 1970s 1980s, then People’s National Congress (PNC) Leader, Linden Forbes Burnham blatantly rigged elections to stay in power and ruled the country in a dictatorial style.
The international community at the time did not intervene much, and even if it did, it was met with much protest as then PNC officials wasted no time in accusing countries of interfering in the affairs of a sovereign State.

However, it is a different environment now. Following the blatant attempts to alter the results of the March 2 polls and to hand a ‘victory’ to the APNU/AFC, foreign powers, with a very loud voice, affirmed their position that they will not stand idly by and allow a Government to be sworn in on the basis of fraudulent results.
Foreign powers – including the Kingdom of Norway, the Heads of the ABCE (the United States, British, Canadian and European Union) Diplomatic Missions, a group of powerful US Senators and several bodies such as the Commonwealth, Organisation of American States (OAS), Nelson Mandela’s The Elders’ Group, and Caricom among others – have been calling for the David Granger-led APNU/AFC to concede defeat and demit office.

They have also called on the Guyana Elections Commission (GECOM) to declare the results of the elections based on the certified figures emanating from the National Recount.
The National Recount, which was conducted under the scrutiny of a special Caribbean Community (Caricom) team shows the PPP/C in a landslide victory with some 15,416 more votes than its main political rival, the caretaker APNU/AFC coalition.

According to Phillips, these foreign powers are merely speaking out in support for democracy to prevail in Guyana.
“The whole world is not against Guyana; the whole world is against the APNU/AFC attempts to hold on to office after losing a popular election. The people voted for the PPP/C and the PPP/C must be allowed to form the next Government of Guyana,” the PM Candidate posited.

But there has been some pushback by the coalition and its supporters, who have attacked many of the regional leaders, despite Caricom being deemed the most “legitimate interlocutors” in the Guyana situation, and even the ABCE diplomats, accusing them of interfering in Guyana’s affairs.