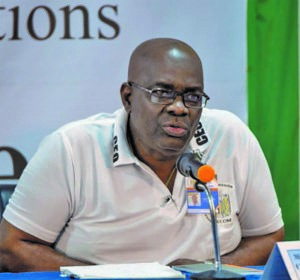 As Guyana prepares for a countrywide recount of all votes cast in the March 2, 2020 General and Regional Elections, the hand of sanctions is hanging like the Sword of Damocles over several persons within the Guyana Elections Commission and A Partnership for National Unity/Alliance for Change (APNU/AFC) for their role in stymieing the process.

Already, several high-ranking international officials have threated to sanction those who facilitated or attempted to derail Guyana’s democracy and Guyanese of their inalienable right to vote for a Government of their choice.
Only on Friday, Assistant Secretary for the US Department of State’s Bureau of Western Hemisphere Affairs, Michael Kozak said that “Democratic nations can’t ignore this blatant disregard for rule of law.”
He warned those who are impeding elections resolution in Guyana that the “world is watching.”

“Respect the will of the Guyanese people to choose their leader,” the State Department official added in a tweet.
This comes on the heels of the starkest warning from the US to the Guyanese election authorities, which last Thursday warned that they should “follow accepted procedures and allow international observers to verify the results”.

In a stern warning, the State Department official cautioned that “under US Law and Practice, those who participate and benefit from electoral fraud, undermine democratic institutions and impede a peaceful transition of power can be subject to a variety of consequences.”
Kozak was adamant that “de facto regimes do not receive the same treatment from us as democratically elected Governments.”

Typically, US sanctions on individuals would begin with removal of their visa privileges, seizures of assets in the US, a freeze on bank accounts. These sanctions would extend to the families of these individuals.
Sources indicate that three prominent persons, had been identified as being involved in the ploy to subvert the process in GECOM. They are on the list of those to be sanctioned.

The Assistant Secretary for the US Department of State’s Bureau of Western Hemisphere Affairs was not the only one who sounded the warning. In fact, UK Foreign Secretary, Dominic Raab called on President David Granger to preserve the sanctity of democratic elections.

United States Secretary of State, Mike Pompeo himself weighed in on the matter when he discussed Guyana with Canada’s Deputy Prime Minister, Chrystia Freeland.
Pompeo, in a tweet, said he spoke about several issues including “support for democratic transition in Guyana”.