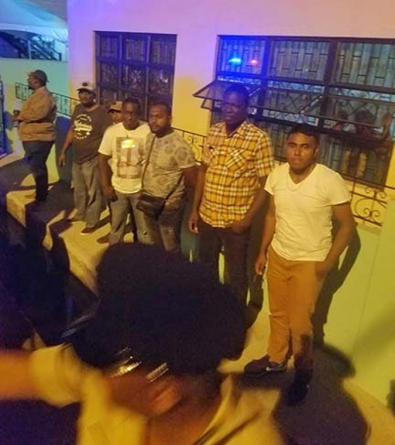 A number of persons were on Monday evening arrested after they were allegedly found in possession of illegal firearms close to polling stations at St. Ambrose Primary School in Alberttown.

The men, sources said were allegedly caught traversing in vehicles, at least one of which is suspected to have borne a false licence registration. They were arrested and taken to the Alberttown Police Station.

The episode was said to have happened around seven last evening. When Stabroek News arrived, a huge crowd had gathered in front of the primary school where several policemen had already blocked off the entrance to the school. Police Commander of Region 4 ‘A’, Edgar Thomas said in a statement that the men were arrested over illegal firearms.

The last of the men to be taken away was one man who was in the St. Ambrose Primary compound. It could not be ascertained whether he was a part of the group of men who showed up or whether he was one of the polling agents. On the inside of the fence, police searched the man’s bag and his person.  Onlookers issued threats while this was taking place.

Almost two hours after the incident, the police were able to escort the man from inside of St. Ambrose Primary through the throng of angry people.

A tow truck later arrived to take away one of the vehicles that was still on the site.

The large crowd then began dissipating and some headed across to the Alberttown Police Station where the men were taken. By this time two representatives from the Carter Center team were on scene. Asked to comment, Jason Carter said, “We’ve heard a little bit and we went and checked things out. We’ve been all over [yesterday] and our observers are everywhere and in every region in the country. We’ve been getting reports all day….We’re trying to be very careful and very patient to get a complete picture before we make any comments but we are investigating everything that we hear”, Carter said.