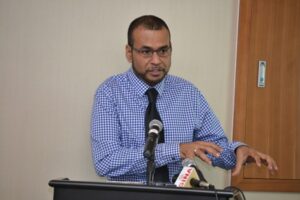 Even though the local media corps along with global transparency bodies have made relentless calls for an international probe to ascertain the truth about the giveaway of the Kaieteur and Canje Blocks to industry unknowns, the People’s Progressive Party /Civic (PPP/C remains unmoved.
Along with its slothfulness to take action in this regard, it even appointed Robert Persaud as Foreign Secretary, in spite of concerns about the role he played in the suspicious award of the nation’s prime assets.

During a recent interview on Kaieteur Radio’s programme, ‘Guyana’s Oil and You’, Chartered Accountant and attorney-at-law, Christopher Ram posited that such a move by the PPP/C only serves to foster a culture of corruption or suspicion. His comment was in response to a question on whether he was surprised that the government retained Persaud in light of the troubling circumstances surrounding the award which Guyanese still have no clarity on.

Ram said: “…Having witnessed politics for a number of decades, nothing surprises me about Guyanese politicians anymore. Whether it be the politicians themselves or who appoints them. After all, Persaud did not appoint himself as Foreign Secretary, a post that was alien to Guyana, but yet there he is.”
The Chartered Accountant added: “And no doubt, he may still have his petroleum consultancy, we don’t know and that is the kind of declaration of interest (that is needed)… In my view, these things foster a culture if not corruption, a culture of suspicion. And it makes the average person wonder, “well what am I doing this for? Standing up for”… because you change the government but nothing changes.”

Over the last three years, this newspaper would have reported that the Canje block was awarded by the Donald Ramotar administration on March 4, 2015, days before the elections to local company, Mid-Atlantic Oil & Gas.
As for the Kaieteur block, it was awarded April 28, 2015 to Ratio Energy Limited (now Cataleya Energy Limited) and Ratio Guyana Limited – just two weeks before the elections – and like Canje – on the advice of former Minister of Natural Resources, Robert Persaud.
In a series titled ‘The Fleecing of Guyana’, Kaieteur News exposed some of the red flags in the Canje and Kaieteur oil blocks agreements.

The red flags which have manifested in both situations include, that the awards were given to unqualified companies, that the initial owners quickly flipped the blocks without doing any work, that they are incorporated in secrecy jurisdictions, and that Guyana likely lost revenue due to the avoidance of an open, competitive bidding process.

During the awards of the Kaieteur and Canje Blocks, this newspaper would have reported as well, on the role Persaud said he played as former Minister of Natural Resources and the Environment.
Persaud had described himself to this news agency as being a mere bridge between former President, Donald Ramotar (who was also the Minister of Energy) and the Guyana Geology and Mines Commission (GGMC). Persaud noted that the applications for those blocks were made between the 2012 to 2013 period while noting that a series of discussions were entered into as required under law with GGMC. The former Minister said that those discussions, based on information and records, show that they lasted for about a year.
Persaud also emphasized that the Minister of Petroleum was always the President and it was only based on GGMC’s recommendations that he provided advice.

GLOBAL WITNESS
In an explosive report called ‘Signed Away’, international transparency body, Global Witness, had taken a comprehensive look into all those connected to the oil blocks give away.
With respect to Persaud, Global Witness said it had interviewed Persaud in July and August 2019 and had asked him about the Kaieteur and Canje licences.

The former-minister had said the awards were made based upon “briefing reports” prepared by GGMC lawyers. Asked who owned the winning companies, Persaud had stated that he “did not know who the beneficial owners are” and that it was not necessary for him, as a minister, to know. He did, however, say he knew some of the people who had signed documents for the companies, such as Kamal Dookie, one of the owners of the Canje Block.

Furthermore, Persaud had said to Global Witness that he could not provide the reports upon which he relied when awarding Kaieteur and Canje. Now out of government, the official had stated too that he did not have access to them. The Foreign Secretary also said he could not remember the names of the persons in the GGMC who had prepared the documents.
Global Witness was keen to note, however, that it has no evidence suggesting that Persaud received anything of value in exchange for his awarding of the Kaieteur and Canje licences, or is guilty of other wrongdoing. Be that as it may, Global Witness still recommended that Guyana conducts further investigations on these awards.