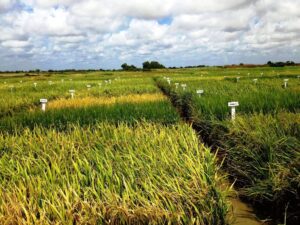 Kaieteur News understands that farmers are struggling to source high quality seed paddy since the most prominently produced variety, called GRDB 10, is not germinating properly or in some cases, not at all.

Dharamkumar Seeraj, who is part of the Guyana Rice Producers Association (RPA), told this newspaper yesterday that he is aware of the challenges while adding that the association is in the process of doing its own information gathering with the hope of helping those in dire need.
Seeraj said: “The variety that is giving the problem is ‘GRDB 10’ and 10 refers to the year it came out, so it was launched in 2010 and it has been around for quite some time. In some seasons, it can account for 30 to 35 percent of total areas cultivated. Occasionally, you might have germinating issues but for some reason the seed paddy for this season recorded poor germination and it is across the country.”

The RPA member added: “I understand that there are some issues with the ‘GRDB 10’ variety sold from the Burma Rice Research Station, as a result, the problem is not restricted to a single farmer or region. I am aware as well that plant breeder and other technical staff at the rice research station are doing some investigations to find out what is really going on.”
Further to this, Seeraj explained that initially, there was an adequate amount of the GRDB 10 available, but after farmers began recording germination issues, they restarted the process with another round of planting in hopes that there would be a change. He said that this eventually impacted the supply that was available. As a result of this, he said that farmers were forced to look at other varieties and even those are now in limited supply.

He said that the alternative varieties include ‘GRDB 16’ that was recently launched. Seeraj said that this variety has the potential to produce high yields but stressed that it is still new. “These new varieties are not the high quality ones you are accustomed to,” the GRPA member added.
Asked to say if this state of affairs which will force farmers to source seeds that are not of the same high quality can eventually affect production at the national level, Seeraj answered in the negative.
He explained that farmers engage in practices after sowing that can be helpful to ensuring quality yields. He said that one such practice is rouging which refers to identifying and removing plants with undesirable characteristics from agricultural fields. In the same breath, he acknowledged that the use of varieties other than the GRDB10 that appears to be problematic at this time will require more resources from farmers to ensure adequate yields.

Seeraj was keen to note that the Guyana Rice Development Board (GRDB) is aware of the issues while adding that a probe is being done by technical staff at the rice research station.
GRDB’s Head, Nizam Hassan, was contacted for a comment but he declined, stating that one would only be provided if permission is received from the Ministry of Agriculture.
Kaieteur News subsequently contacted the Ministry. Director General, Madanlall Ramraj, was quite forthcoming on the matter at hand.

Ramraj admitted that at first, the Ministry was aware of the complaints but committed to making contact with the research station for clarifications. Following this, the Director General said that the scientists have informed him that the absence of the ideal conditions for germination appears to be the problem at hand.
Ramraj said, “…We had this issue before with GRDB 10 and sought to improve on it with GRDB 14, 15 and 16. So this problem existed before…Nevertheless, GRDB is replacing some of the seed paddies. It is not just a problem facing GRDB but also farmers who have been planting ‘GRDB 10’ and multiplying and selling to farmers…So it tells you that the ideal conditions were not present for the kind of germination to take place…”
The Director General said that the agency is doing its best to deal with the matter but still appealed for farmers experiencing difficulties to make contact with the board for assistance.