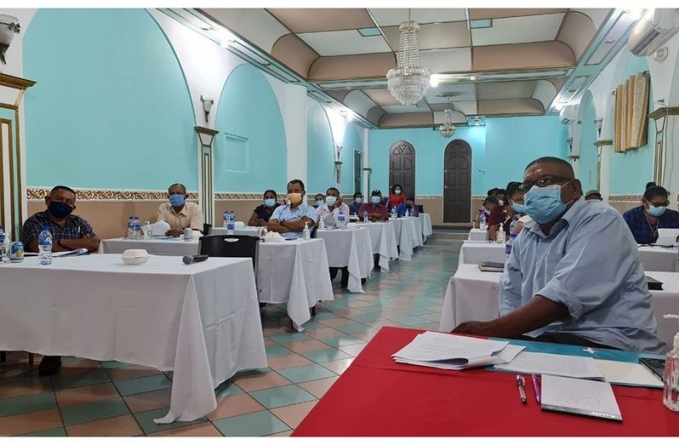 A GROUP of Indigenous leaders intend to present a joint statement to the Minister of Amerindian Affairs, Pauline Sukhai, indicating their collective decision that the revision of the Amerindian Act 2006 is of highest priority; they also plan to seek a meeting with the minister to submit their proposal.
This decision was finalised by the Amerindian Peoples’ Association (APA) and the National Toshaos Council (NTC) on Friday last when they concluded a three-day joint meeting to discuss priority issues.
They are of the firm belief that the Act does not thoroughly recognise the rights of Indigenous Peoples’ and does not meet international standards or the provisions of the constitution of Guyana.

The Amerindian Act, which is the primary legislation governing the affairs of the Indigenous peoples of Guyana, has been pending revision since 2017, according to a press release by the APA. As part of the meeting, the Indigenous leaders engaged in extensive discussions on recommendations for the proposed revision of Act done previously and submitted to the Ministry in 2019. Among these are amendments to existing arrangements that fall under Land Titling, Free, Prior and Informed Consent and Village Governance. Speaking at the opening of the workshop, President of the APA, Lemmel Benson Thomas, reminded participants to be responsible with their lifestyles as Indigenous peoples, noting that that meetings of this kind were “the aspirations of other indigenous groups in other countries”, and suggested they take advantage of the opportunity to place continued focus on the protection of their rights and lands.

“Our political landscape is changing; our economies are changing, socially, our lives are changing but, we have to adapt to it,” Thomas added.
In March 2017, public commitment from the former A Partnership for National Unity + Alliance For Change (APNU+AFC) coalition government to have the Act revised had prompted the APA and National Toshaos Council to jointly facilitate activities aimed at jumpstarting the revision process.
The APA and NTC had conducted various training programmes, conventions, capacity-building programmes and district level meetings during that time. The programmes were aimed at understanding the provisions of the current Act and working towards arriving at specific recommendations for revision, but due to the implications of the no-confidence motion, the meeting slated to take place between the government and the relevant stakeholders never occurred.

The People’s Progressive Party/ Civic, before their subsequent election to office, had also made public promises to have the Act revised. This was included in their manifesto in the run-up to the general elections of March 2020. However, with the five-month lapse before the final declaration of the 2020 General and Regional Elections results in August 2020, legislative action was, once again, delayed.
The Indigenous Peoples expressed their confidence that the new government will commit to its promise in prioritising the revision of the Amerindian Act 2006.
Several organisations including the APA, NTC, UMDC, NPDC and SRDC, have since met with the current Minister of Amerindian Affairs, and have discussed the revision of the Act as part of their general discussions with her.