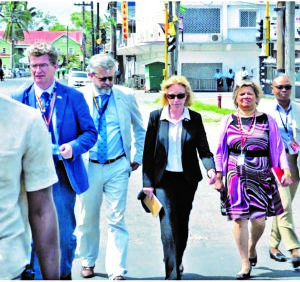 Members of the diplomatic community in Guyana have warned against leading Guyana into isolation, as they continue to lament the lack of transparency and credibility in the tabulation of the elections result for Region Four (Demerara-Mahaica).

No transparency
In a subsequent joint statement, locally accredited western diplomats explained that they decided to leave the Region Four tabulation process earlier in the day as it was clear that a transparent and credible process was not put in place by the responsible officials.

“We must be clear that in the absence of a credible process, as directed by the Honourable Chief Justice [Roxane George], it is our view that any results for Region 4 which will impact the overall results of the 2 March elections will not be credible and a President sworn in on the basis of those results will not be considered legitimate,” they posited.
The Heads of Missions further outlined in the joint missive their concerns about intimidation tactics they have observed against those seeking to ensure that a credible process is followed.

Reminding that they are all long-standing friends of Guyana, whose countries have supported its development over many decades, the foreign envoys cautioned against leading the country into isolation.
“The betterment of Guyana and its people has always been our interest. In that spirit, we urge all parties to not do anything which could lead to Guyana’s isolation,” the joint statement from the ABCE diplomatic community detailed.

The Heads of Missions, who were all accredited as local observers to monitor the electoral process, had not returned to monitor the tabulation process which continued on Friday but not without more concerns raised over the methodology used by the Returning Officer, Clairmont Mingo, who insisted on using excerpts from the Statements of Poll instead of the original SoPs as ordered and reasserted by the Chief Justice.

The ABCE diplomats had previously expressed deep concern over “credible allegations of electoral fraud which may influence the results of this election”.
The Heads of Mission, in similar joint statement last Friday, called “…on all to ensure proper procedures are in place to yield a credible election result. A fair and free process is vital for the maintenance and reinforcement of democracy in Guyana.”
They had also implored with incumbent President David Granger to avoid a transition of government, which they believe would be unconstitutional as it would be based on a vote tabulation process that lacked credibility and transparency.